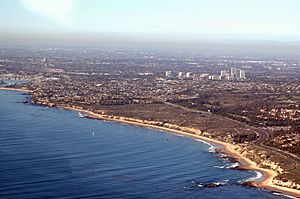 Corona del Mar High School is located in the neighborhood of Eastbluff. 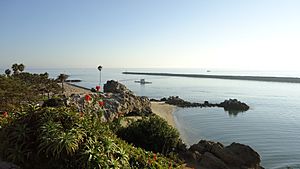 It is the setting for the Fox series Arrested Development (mentioned by name in Season 2, Episode 14 The Immaculate Election) as well as residence of Martine and Dustin Rhodes in the Dean Koontz novel False Memory.

The Lost Dogs paid tribute to Corona del Mar on their 2006 album, The Lost Cabin and the Mystery Trees, with the song "Only One Bum In Corona del Mar."

It is the set for the opening scene for Gilligan's Island when the S.S. Minnow is leaving the Harbor.

All content from Kiddle encyclopedia articles (including the article images and facts) can be freely used under Attribution-ShareAlike license, unless stated otherwise. Cite this article:
Corona del Mar, Newport Beach Facts for Kids. Kiddle Encyclopedia.