James Arness (May 26, 1923 – June 3, 2011) was an American actor, best known for portraying Marshal Matt Dillon for 20 years in the television series Gunsmoke. Arness has the distinction of having played the role of Dillon in five separate decades: 1955 to 1975 in the weekly series, then in Gunsmoke: Return to Dodge (1987) and four more made-for-television Gunsmoke films in the 1990s. In Europe, Arness reached cult status for his role as Zeb Macahan in the western series How the West Was Won.

James Arness was born James King Aurness in Minneapolis, Minnesota on May 26, 1923; he dropped the "u" when he started acting. His father’s ancestry was Norwegian; his mother's was German. Arness and his family were Methodists. Arness' younger brother was actor Peter Graves. Peter used the stage name "Graves", a maternal family name.

Arness attended John Burroughs Grade School, Washburn High School, and West High School in Minneapolis. During this time, Arness worked as a courier for a jewelry wholesaler, loading and unloading railway boxcars at the Burlington freight yards in Minneapolis, and logging in Pierce, Idaho. Despite "being a poor student and skipping many classes", he graduated from high school in June 1942.

Although Arness wanted to be a naval fighter pilot, he was concerned his poor eyesight would bar him. However, it was his 6 feet 7 inches (2.01 m) frame that ended his chances because the limit for aviators was set at 6 feet 2 inches (1.88 m). He was drafted into the US Army and reported to Fort Snelling, Minnesota in March 1943.

As a rifleman, he landed on Anzio Beachhead on January 22, 1944, with the 2nd Platoon, E Company, 2nd Battalion, 7th Infantry Regiment of the 3rd Infantry Division. Arness - due to his height - was the first man to be ordered off his landing craft to determine the depth of the water; it came up to his waist. Arness was severely wounded in his right leg during the Battle of Anzio.

Arness was sent to the U.S. Army 91st General Hospital in Clinton, Iowa, to be treated for his wounds. After undergoing several surgeries, he was honorably discharged on January 29, 1945. However, his wounds continued to bother him throughout the rest of his life; in later years he had to cope with chronic leg pain that often became acute, such as when he mounted horses during his performance on Gunsmoke. His military decorations include the Bronze Star, the Purple Heart, the European-African-Middle Eastern Campaign Medal with three bronze battle stars, the World War II Victory Medal, and the Combat Infantryman Badge. 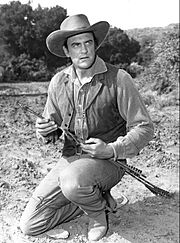 After his discharge from the service, Arness entered Beloit College in Wisconsin. He began his entertainment career as a radio announcer at Minneapolis station WLOL in 1945.

Though identified with Westerns, Arness also appeared in two science fiction films, The Thing from Another World (in which he portrayed the title character) and Them!. He was a close friend of John Wayne and co-starred with him in Big Jim McLain, Hondo, Island in the Sky, and The Sea Chase, and starred in Gun the Man Down for Wayne's company. He also starred in a 1988 TV remake of Wayne's 1948 classic Red River

Gunsmoke made Arness and his co-stars world-famous and would run for two decades, becoming the longest-running prime-time drama series in US television history by the end of its run in 1975. The series' season record was tied only in 2010 with the final season of Law & Order. Unlike the latter show, Gunsmoke featured its lead character in each of its 20 seasons; Gunsmoke also aired 179 more episodes, and was in the top 10 in the ratings for 11 more seasons, for a total of 13, including four consecutive seasons at number one. The Norwegian-German Arness had to dye his naturally blond hair darker for the role.

After Gunsmoke ended, Arness performed in Western-themed movies and television series, including How the West Was Won, and in five made-for-television Gunsmoke movies between 1987 and 1994. An exception was as a big-city police officer in a short-lived 1981-1982 series, McClain's Law, co-starring with Marshall Colt. His role as mountain man Zeb Macahan in How the West Was Won made him a cult figure in many European countries, where it became even more popular than in the United States, as the series has been rebroadcast many times across Europe. 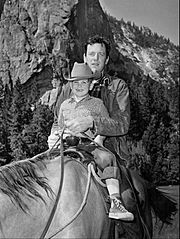 Arness was married twice. He had two sons and one daughter. His son Rolf Arness became World Surfing Champion in 1970. Craig Arness founded the stock photography agency Westlight and also was a photographer for National Geographic. Arness is survived by Rolf and by his adopted son.

Despite his stoic character, according to Ben Bates, his Gunsmoke stunt double, Arness laughed "from his toes to the top of his head." Shooting on the Gunsmoke set was sometimes suspended because Arness got a case of the uncontrollable giggles. James Arness disdained publicity and banned reporters from the Gunsmoke set. He was said to be a shy and sensitive man who enjoyed poetry, sailboat racing, and surfing. Buck Taylor (Newly on Gunsmoke) thought so highly of Arness that he named his second son, Matthew, after Arness' character.

Arness died of natural causes at age 88 at his Brentwood home in Los Angeles on June 3, 2011. He is interred at the Forest Lawn Memorial Park in Glendale, California.

For his contributions to the television industry, Arness has a star on the Hollywood Walk of Fame at 1751 Vine Street. In 1981, he was inducted into the Western Performers Hall of Fame at the National Cowboy & Western Heritage Museum in Oklahoma City. Arness was inducted into the Santa Clarita Walk of Western Stars in 2006, and gave a related TV interview.

On the 50th anniversary of television in 1989 in the United States, People magazine chose the top 25 television stars of all time. Arness was number 6. In 1996, TV Guide ranked him number 20 on its 50 Greatest TV Stars of All Time list.

Arness was nominated for the following Emmy Awards:

All content from Kiddle encyclopedia articles (including the article images and facts) can be freely used under Attribution-ShareAlike license, unless stated otherwise. Cite this article:
James Arness Facts for Kids. Kiddle Encyclopedia.