Battle of Anzio facts for kids

The Battle of Anzio, which is also called Operation Shingle (January 22, 1944) was an Allied sea landing in the Italian Campaign against German forces of Anzio and Nettuno, Italy.

The attack was commanded by American Major General John P. Lucas. He wanted to get around German forces on the Winter Line. Then he wanted to attack Rome. Making a sea landing in a marshland needed to be done quickly.

After a month of heavy fighting, the Allies finally got past the beaches in May. The Allies went north-west to Rome which was captured on 4 June.

The German Tenth Army at Cassino were able to go north of Rome. Then they got ready to defend the Gothic Line.

At the end of 1943, following the Allied invasion of Italy, Allied forces were stuck at the Gustav Line. Thid was defensive line across Italy. The land of central Italy helped the defence.

Operation Shingle was planned by Winston Churchill in December 1943. He planned to land two divisions at Anzio and capture Rome.

General Harold Alexander had thought of a plan using five divisions. However, the 5th Army did not have enough troops or a way to transport them.

The Anzio and Nettuno beaches are on marshland. When Truscott's 3rd Division was selected for the attack, he said everyone would die. Lucas was told lead the Fifth Army's U.S. VI Corps in a landing in the Anzio/Nettuno area.

Planners thought that if German forces left the Gustav Line to defend against the Allied attack, then Allied forces would be able to break through the line. If troops were left on the Gustav Line, then the Allies could try to capture Rome.

The Allies planned to attack from the south. They wanted to capture a beach near Anzio, move forward, and be ready to go to Rome.

The attack consisted of three groups:

The Fifth Army's attack on the Gustav Line began on January 16, 1944, at Monte Cassino. The attack failed to break through. The Germans brought in new troops from Rome. 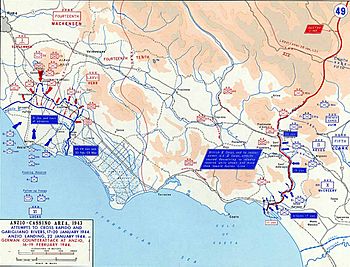 The landings began on January 22, 1944. The Germans did not attack the landings except for a few Luftwaffe machine gun attacks. By midnight, 36,000 soldiers and 3,200 vehicles had landed on the beaches.

Two Allied divisions landed. There were two or three times that many German defenders.

The Allies attacked on January 30. One group moved to Cisterna. A second group went northeast towards Campoleone.

By early February German forces in Fourteenth Army had 100,000 troops. Allied forces by this time were 76,400 German forces launched a full attack at 23:00.

On February 16 the Germans launched a new attack. Both had 20,000 casualties each since the first landings. Also on February 18 while returning to Anzio the light cruiser HMS Penelope was struck by two torpedoes and sunk with a loss of 417 men. 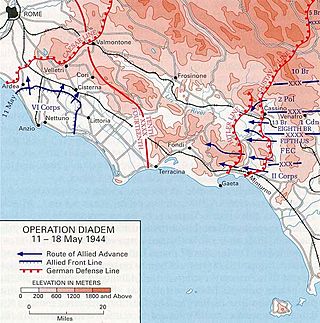 Allied plan of attack for 'Operation Diadem', May 1944

Both sides realised that no result could be achieved until the spring. The Germans built a new defence line, the Caesar C line. The Allies planned an attack in May. This would include attacking the Gustav Line, which was called Operation Diadem.

There were five German divisions. The Germans had prepared defenses, but they lacked officers. 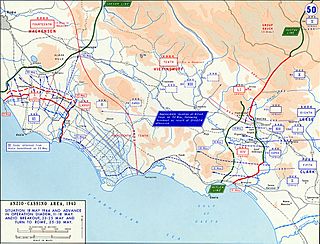 In the afternoon of May 25 Cisterna was captured by the 3rd Division. In the evening, the Allies turned ninety degrees to the left. On the new attack little progress was made until 1st Armored arrived on May 29. On June 2 the Caesar Line broke and the 14th Army pulled back through Rome. Hitler ordered no defence of Rome.

After the war, some experts said the Anzio plan was not good. It used just two infantry divisions with no armour.

Operation Diadem (during which U.S. 5th and British 8th Armies had 44,000 casualties) failed in its goal of destroying the German 10th Army.

All content from Kiddle encyclopedia articles (including the article images and facts) can be freely used under Attribution-ShareAlike license, unless stated otherwise. Cite this article:
Battle of Anzio Facts for Kids. Kiddle Encyclopedia.