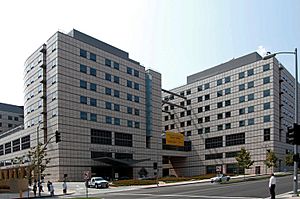 The hospital was founded in 1955. It was reopened in June 2008 and named after President of the United States Ronald Reagan.

All content from Kiddle encyclopedia articles (including the article images and facts) can be freely used under Attribution-ShareAlike license, unless stated otherwise. Cite this article:
Ronald Reagan UCLA Medical Center Facts for Kids. Kiddle Encyclopedia.