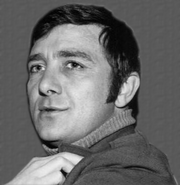 Dawson was born Colin Lionel Emm in Gosport, Hampshire to an American father and English mother. Dawson married Diana Dors in 1959; they lived in California. The couple had two sons, entertainment manager Mark (born 1960) and Gary (born 1962). She left him and in 1967 the couple divorced. His second marriage lasted from 1991 until his death from esopheageal cancer in Los Angeles, California.

Dawson played a prisoner of war in Hogan's Heroes and hosted Family Feud.

All content from Kiddle encyclopedia articles (including the article images and facts) can be freely used under Attribution-ShareAlike license, unless stated otherwise. Cite this article:
Richard Dawson Facts for Kids. Kiddle Encyclopedia.