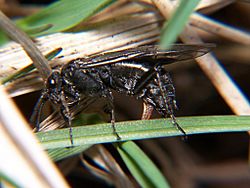 Sawflies are the insects of the suborder Symphyta within the order Hymenoptera alongside ants, bees and wasps. The common name comes from the saw-like appearance of the ovipositor, which the females use to cut into the plants where they lay their eggs. The name is associated especially with the Tenthredinoidea, by far the largest superfamily, with about 7,000 known species; in the entire suborder, there are 8,000 described species in more than 800 genera. The suborder Symphyta is paraphyletic, consisting of several basal groups within the order Hymenoptera.

The primary distinction between sawflies and their relatives the Apocrita – the ants, bees, and wasps – is that the adults lack a "wasp waist", and instead have a broad connection between the abdomen and the thorax. Some sawflies are Batesian mimics of wasps and bees, and the ovipositor can be mistaken for a stinger. Sawflies vary in length, most measuring 2.5 millimetres (0.1 in) to 20 millimetres (0.8 in); the largest known sawfly measured 55 millimetres (2.2 in). The larvae are caterpillar-like, but can be distinguished by the number of prolegs and the absence of crochets in sawfly larvae. The great majority of sawflies are plant-eating, though the members of the superfamily Orussoidea are parasitic.

Predators include birds, insects and small animals. The larvae of some species have anti-predator adaptations such as regurgitating irritating liquid and clustering together for safety in numbers. Sawflies are hosts to many parasitoids, most of which are Hymenoptera, the rest being Diptera.

Adult sawflies are short-lived, with a life expectancy of 7–9 days, though the larval stage can last from months to years, depending on the species. Parthenogenetic females, which do not need to mate to produce fertilised eggs, are common in the suborder, though many species have males. The adults feed on pollen, nectar, honeydew, sap, other insects, including hemolymph of the larvae hosts; they have mouth pieces adapated to these types of feeding.

Sawflies go through a complete metamorphosis with four distinct life stages – egg, larva, pupa and adult. The female uses her ovipositor to drill into plant material (or, in the case of Orussoidea, other insects) and then lays eggs in groups called rafts or pods. After hatching, larvae feed on plants, often in groups. As they approach adulthood, the larvae seek a protected spot to pupate, typically in bark or the soil. Large populations of species such as the pine sawfly can cause substantial damage to economic forestry, while others such as the iris sawfly are important pests in horticulture. Outbreaks of sawfly larvae can defoliate trees and may cause dieback, stunting or death. Sawflies can be controlled through the use of insecticides, natural predators and parasites, or mechanical methods.

Sawflies first appeared 250 million years ago in the Triassic. The oldest superfamily, the Xyeloidea, has existed into the present. Over 200 million years ago, a lineage of sawflies evolved a parasitoid lifestyle, with carnivorous larvae that ate the eggs or larvae of other insects. Sawflies are distributed globally, though they are more diverse in the northern hemisphere.

The cladogram is based on Schulmeister 2003. 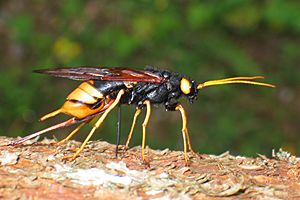 Giant horntail, Urocerus gigas, a Batesian mimic of a hornet, ovipositing. It does not sting.

Many species of sawfly have retained their ancestral attributes throughout time, specifically their plant-eating habits, wing veins and the unmodified abdomen, where the first two segments appear like the succeeding segments. The absence of the narrow wasp waist distinguishes sawflies from other members of hymenoptera, although some are Batesian mimics with coloration similar to wasps and bees, and the ovipositor can be mistaken for a stinger. Most sawflies are stubby and soft-bodied, and fly weakly. Sawflies vary in length: Urocerus gigas, which can be mistaken as a wasp due to its black-and-yellow striped body, can grow up to 20 millimetres (0.8 in) in length, but among the largest sawflies ever discovered was Hoplitolyda duolunica from the Mesozoic, with a body length of 55 millimetres (2.2 in) and a wingspan of 92 millimetres (3.6 in). The smaller species only reach lengths of 2.5 millimetres (0.1 in). 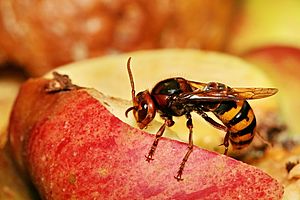 The European hornet is a wasp-waisted Apocritan with a sting, not a Symphytan.

Heads of sawflies vary in size, shape and sturdiness, as well as the positions of the eyes and antennae. They are characterised in four head types: open head, maxapontal head, closed head and genapontal head. The open head is simplistic, whereas all the other heads are derived. The head is also hypognathous, meaning that the lower mouthparts are directed downwards. When in use, the mouthparts may be directed forwards, but this is only caused when the sawfly swings its entire head forward in a pendulum motion. Unlike most primitive insects, the sutures (rigid joints between two or more hard elements on an organism) and sclerites (hardened body parts) are obsolescent or absent. The clypeus (a sclerite that makes up an insects "face") is not divided into a pre- and postclypeus, but rather separated from the front. The antennal sclerites are fused with the surrounding head capsule, but these are sometimes separated by a suture. The number of segments in the antennae vary from six in the Accorduleceridae to 30 or more in the Pamphiliidae. The compound eyes are large with a number of facets, and there are three ocelli between the dorsal portions of the compound eyes. The tentorium comprises the whole inner skeleton of the head. 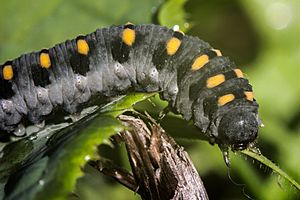 The larvae of sawflies are easily mistaken for lepidopteran larvae (caterpillars). However, several morphological differences can distinguish the two: while both larvae share three pairs of thoracic legs and an apical pair of abdominal prolegs, lepidopteran caterpillars have four pairs of prolegs on abdominal segments 3-6 while sawfly larvae have five pairs of prolegs located on abdominal segments 2-6; crochets are present on lepidopteran larvae, whereas on sawfly larvae they are not; the prolegs of both larvae gradually disappear by the time they burrow into the ground, therefore making it difficult to distinguish the two; and sawfly larvae only have a single pair of minute eyes, whereas lepidopteran larvae have four to six eyes on each side of the head. Sawfly larvae behave like lepidopteran larvae, walking about and eating foliage. Some groups have larvae that are eyeless and almost legless; these larvae make tunnels in plant tissues including wood. Many species of sawfly larvae are strikingly coloured, exhibiting colour combinations such as black and white while others are black and yellow. This is a warning colouration because some larvae can secrete irritating fluids from glands located on their undersides.

Sawflies are widely distributed throughout the world. The largest family, the Tenthredinidae, with some 5,000 species, are found on all continents except Antarctica, though they are most abundant and diverse in the temperate regions of the northern hemisphere; they are absent from New Zealand and there are few of them in Australia. The next largest family, the Argidae, with some 800 species, is also worldwide, but is commonest in the neotropics, especially in Africa, where they feed on woody and herbaceous angiosperms. Of the other families, the Blasticotomidae and Megalodontidae are Palearctic; the Xyelidae, Pamphilidae, Diprionidae, Cimbicidae, and Cephidae are Holarctic, while the Siricidae are mainly Holarctic with some tropical species. The parasitic Orussidae are found worldwide, mostly in tropical and subtropical regions. The wood-boring Xiphydriidae are worldwide, but most species live in the subtropical parts of Asia.

All content from Kiddle encyclopedia articles (including the article images and facts) can be freely used under Attribution-ShareAlike license, unless stated otherwise. Cite this article:
Sawfly Facts for Kids. Kiddle Encyclopedia.