The spitfire sawfly (Perga affinis, family Pergidae) is a hymenopteran insect found in Australia. It is up to 22 mm long. It has two pairs of wings, with a wingspan up to 40 mm. Its wings are honey colored. Its larvae are up to 80 mm long, and somewhat resemble a caterpillar.

The sawfly derives its name from the saw-like ovipositor of the female, which is used to open holes in the plant within which she lays her eggs. While closely related to wasps, sawflies lack both the narrow waist and sting of the wasp.

Although the adults of this sawfly species are not often seen the larvae are quite conspicuous as they grow larger, resembling hairy caterpillars. Steelblue sawfly larvae are usually seen during the day in groups on the branches and stems of Eucalyptus trees. At night they disperse to eat leaves of the host plant. When threatened the larvae will raise their head and eject a strong-smelling yellow-green liquid consisting predominantly of eucalyptus oil, to deter predators. This action gives them their common name of 'spitfires'. 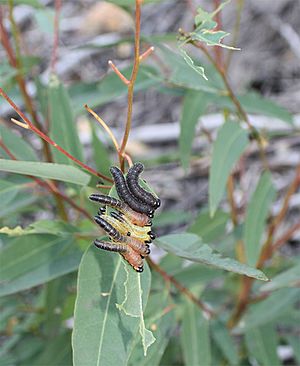 The larvae vary from dark blue or black to yellow and brown depending on the species and up to 80 mm long. The body is sparsely covered with white bristly hairs and the tail, which is raised when disturbed, is yellow and can exude an odorous fluid. During the day the larvae congregate in clusters of 20 or 30 for protection and disperse at night to feed. The adult wasps are mainly black or brown, with yellowish markings and about 25 mm long. 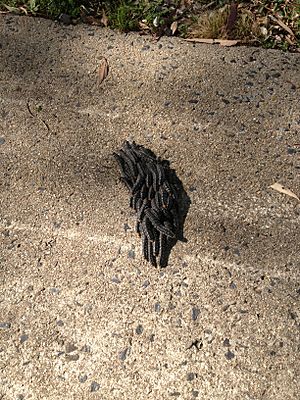 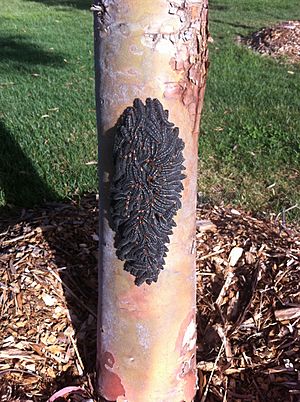 The adult wasps are found from about January to May, though mainly in autumn. Eggs are laid under the leaf surface with the saw-like ovipositor. The larvae are mainly active during late winter and spring and enter the soil to pupate usually in mid spring. Pupation takes place in strong paper-like cocoons, which are often clustered several centimetres deep in the soil. The pupal stage may extend over two or three years before the adult wasp emerges.

Larvae of spitfires feed on the foliage of young trees and regrowth stems, and can strip the branches of foliage particularly at the tops. This is usually replaced during the spring-summer flush of leaf growth. Serious retardation of high growth may result from repeated attack but death is unusual. Wandoo is the most commonly attacked species in Western Australia.

Where the clusters of larvae are accessible the simplest method of control is to remove and destroy them during the day. There are a number of parasitic wasps which also have some controlling effect and widespread damage by this defoliator is rare.

All content from Kiddle encyclopedia articles (including the article images and facts) can be freely used under Attribution-ShareAlike license, unless stated otherwise. Cite this article:
Spitfire sawfly Facts for Kids. Kiddle Encyclopedia.