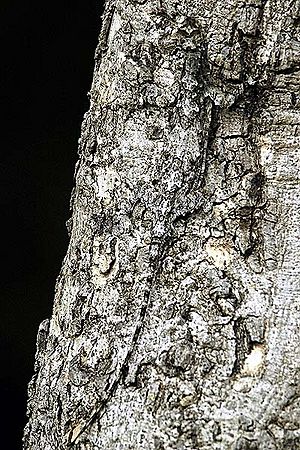 Crypsis is a word in ecology which means "hiding". It refers to the ways animals avoid being seen, or otherwise detected. It also includes the situation when an animal is noticed, but is not recognised for what it is. It may be either a defence against predators, or a device for predators to get near prey.

Methods include camouflage, nocturnality (night-time activity), subterranean lifestyle, transparency, and mimicry. The word can also be used about eggs, and about pheromone production. Crypsis can in principle involve visual, olfactory or auditory camouflage.

All content from Kiddle encyclopedia articles (including the article images and facts) can be freely used under Attribution-ShareAlike license, unless stated otherwise. Cite this article:
Crypsis Facts for Kids. Kiddle Encyclopedia.