The Hebridean is a breed of small black sheep from Scotland, similar to other members of the Northern European short-tailed sheep group, having a short, triangular tail. They often have two pairs of horns. They were often formerly known as "St Kilda" sheep, although unlike Soay and Boreray sheep they are probably not in fact from the St Kilda archipelago. 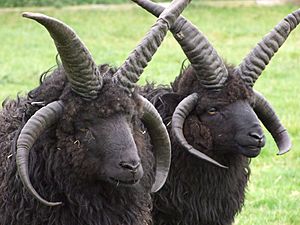 Modern Hebrideans have black, rather coarse wool, which fades to brown in the sun and often becomes grey with age; there is no wool on the face or legs. If not shorn the wool may moult naturally in spring. Rams and ewes typically have one pair of horns, but often have two or even more pairs (polycerate), and occasionally none. They are considerably smaller than most other breeds of sheep, fully grown ewes weighing only around 40 kg (88 lb), and rams slightly heavier, at around 50 to 60 kg (110 to 130 lb). Hebrideans are hardy and able to thrive on rough grazing, and so are often used as conservation grazing animals to maintain natural grassland or heathland habitats. They are particularly effective at scrub control, having a strong preference for browsing. 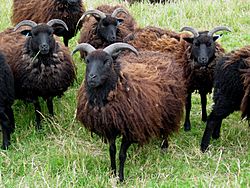 A flock of Hebridean sheep

The sheep kept throughout Britain up to the Iron Age were small, short-tailed, and varied in colour. These survived into the 19th century in the Highlands and Islands as the Scottish Dunface, which had various local varieties, most of which are now extinct (some do survive, such as the Shetland and North Ronaldsay). The Dunfaces kept in the Hebrides were very small, with white faces and legs; their bodies were usually white, but often black, brown, russet or grey. The fleece was short and soft and they were typically horned in both sexes, many of them having two or even three pairs of horns. The Dunface was gradually replaced with long-tailed breeds such as the Scottish Blackface and Cheviot; it died out on the mainland and eventually also on the Hebridean islands.

The last known native Hebridean sheep survived on Uist, and in the 1880s some were taken from there to Storrs Hall at Windermere in Cumbria, northern England. These sheep were distributed as ornamental animals to various estates in England and Scotland, generally being called "St Kilda" sheep. Eventually only black sheep remained in these flocks. The black gene carried by Hebrideans is absent from endemic European sheep, but does occur in some Middle Eastern types. It is thought that it was acquired at some time by the Hebridean (and also by the Black Welsh Mountain) through interbreeding with the Jacob, which is thought to be derived from Middle Eastern or Mediterranean sheep and which has also been widely kept as an ornamental animal.

In 1973 the ornamental Hebrideans were identified by the Rare Breeds Survival Trust as being in need of conservation. Since then the breed has been revived, and it is no longer regarded as rare; it is kept in many parts of the world, now including its native Hebrides.

All content from Kiddle encyclopedia articles (including the article images and facts) can be freely used under Attribution-ShareAlike license, unless stated otherwise. Cite this article:
Hebridean sheep Facts for Kids. Kiddle Encyclopedia.