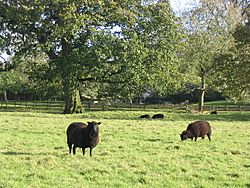 Introduced into the United States in 1973 through a single importation of 3 rams and 13 ewes by Mr. Tom Wyman of New York, the fleece from the Black Welsh Mountain has generated special interest among hand spinners and weavers. As only 2 rams survived quarantine, the US flock is genetically descended from these 2 sire lines with only an additional importation of frozen sheep semen in the late 1990s to add some genetic diversity to the US herds. Nine ewes formed the foundation population.

Apart from being wholly black, the Black Welsh Mountain is like other Welsh Mountain sheep – small and hardy with no wool on the face or legs; the males are horned, but females are normally polled. These sheep are known for lambing easily, as well as good milk and very high fertility.

A small number of wild Mouflon sheep were introduced from Sardinia in 1906 and from Corsica in 1908 to Lambay Island (off the coast of Dublin) where they produced offspring. These were crossed with Welsh Black Mountain sheep and the inheritance of their wool-colour studied (Fraser Roberts, A. J. 1931 Colour inheritance in sheep; vi The genetic constitution of the Wild Mouflon, J. Genetics XXV (1)).

All content from Kiddle encyclopedia articles (including the article images and facts) can be freely used under Attribution-ShareAlike license, unless stated otherwise. Cite this article:
Black Welsh Mountain sheep Facts for Kids. Kiddle Encyclopedia.