Stag beetles are a group of about 1,200 species of beetles in the family Lucanidae, presently classified in four subfamilies. Some species grow to over 12 cm (4.7 in), but most are about 5 cm (2.0 in). 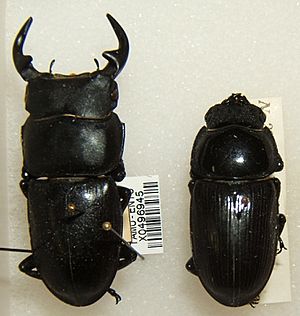 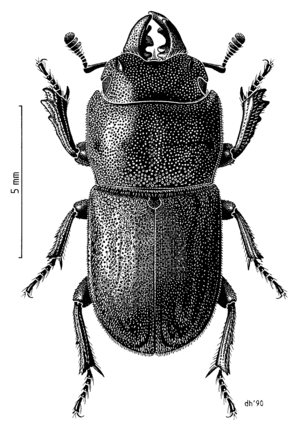 The English name is derived from the large and distinctive mandibles found on the males of most species, which resemble the antlers of stags.

A well-known species in much of Europe is Lucanus cervus, referred to in some European countries (including United Kingdom) as "the" stag beetle (it is the largest terrestrial insect in Europe). Pliny the Elder noted that Nigidius called the stag beetle lucanus after the Italian region of Lucania where they were used as amulets. The scientific name of Lucanus cervus is this word, plus cervus, deer.

Male stag beetles use their jaws to wrestle each other for favoured mating sites in a manner that parallels the way stags fight over females. Fights may also be over food, such as tree sap and decaying fruits. Despite their often fearsome appearance, they are not normally aggressive to humans.

Female stag beetles are usually smaller than the males, with smaller mandibles. The mandibles, though smaller, are much more powerful than the males'. As larvae, females can be distinguished from males by the presence of cream-coloured, fat ovaries visible through the skin around two-thirds of the way down the larva's back.

The larvae feed for several years on rotting wood, growing through three larval stages until eventually pupating inside a pupal cell constructed from surrounding wood pieces and soil particles. In the final larval stage, "L3", the grubs of larger species, such as Prosopocoilus giraffa, may be the size of a human finger.

They, along with rhinoceros beetles, are often bought as pets in Japan.

All content from Kiddle encyclopedia articles (including the article images and facts) can be freely used under Attribution-ShareAlike license, unless stated otherwise. Cite this article:
Stag beetle Facts for Kids. Kiddle Encyclopedia.