The Cuckooland Museum, previously known as the Cuckoo Clock Museum, is a museum that exhibits mainly cuckoo clocks, located in Tabley, Cheshire, England. The collection comprises 300 years of cuckoo clock-making history, since the very earliest examples made in the 18th to the 21st century.

The museum was set up in 1990 by brothers Roman and Maz Piekarski after bringing together a collection of antique Black Forest cuckoo clocks that has been continuously increased ever since. Both men were trained as clockmakers in Manchester from the age of 15, which is when their fascination with these timepieces began.

It became apparent to them that an important part of European clock-making history was liable to disappear if surviving examples fell into irretrievable disrepair. Their guiding principles have always been to purchase objects only of the highest museum quality and which held an important significance in the historical development of cuckoo timekeeping.

In Roman Piekarski's own words: When we started collecting in the 1970s no one wanted them because battery and electric clocks were all the rage. We picked many up for next to nothing. 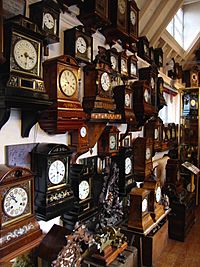 In the past, the exhibition also included other kind of timepieces such as longcase, wall and bracket clocks but now focuses on c. clocks especially.

Cuckooland has nowadays more than 700 cuckoo clocks on display of different styles, sizes, manufacturers and ages. Many of the timekeepers are very rare and the collection contains the best examples of the cuckoo clockmaker’s art: 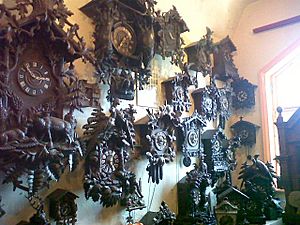 Some of the clocks displayed at the cuckooland museum.

Throughout the years, the attendance of the two brothers at clock fairs and auctions, the purchasing of specialized bibliography, trips, the internet, their own research, etc., have led them to acquire many of the clocks, gaining experience and knowledge on the subject. They document all of the aspects related to every piece of the collection in terms of: age, history, manufacturer, style, technical aspects and provenance.

One of the aims of the museum is to restore and preserve the most unusual, outstanding and unusual exemplaries to be enjoyed by future generations, as well as to contribute to the appreciation and estimation of this timepiece through its importance in horology and historic significance in the Western culture.

All content from Kiddle encyclopedia articles (including the article images and facts) can be freely used under Attribution-ShareAlike license, unless stated otherwise. Cite this article:
Cuckooland Museum Facts for Kids. Kiddle Encyclopedia.