The Senator John Heinz History Center, an affiliate of the Smithsonian Institution, is the largest history museum in the Commonwealth of Pennsylvania, United States. Named after U.S. Senator H. John Heinz III (1938–1991) from Pennsylvania, it is located in the Strip District of Pittsburgh.

The Heinz History Center is a 275,000-square-foot (25,500 m2) educational institution "that engages and inspires a diverse audience with links to the past, understanding in the present, and guidance for the future by preserving regional history and presenting the American experience with a Western Pennsylvania connection." 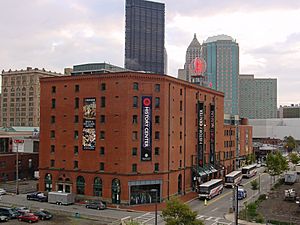 The century-old Chautauqua Lake Ice Company building was renovated and adapted by the Pittsburgh office of the architecture firm of Bohlin Cywinski Jackson, who did the design and oversaw construction. The interior was designed to show off the building's features, as well as create spaces for exhibits and support space. The museum building is an exhibit in its own right. The History Center also features the following permanent exhibitions:

The museum's history began in 1879, with the formation of a club called Old Residents of Pittsburgh and Western Pennsylvania. In 1884 it changed its name to the Historical Society of Western Pennsylvania (HSWP) and has been operating continuously since then. It is the Pittsburgh region's oldest cultural organization.

HSWP began the tradition of interpreting public history in 1911, organizing the centennial of steamboat navigation in Pittsburgh. In 1955 it led the organization of the city's bicentennial celebration. In the early years, HSWP held meetings in homes and churches, but in 1893, it was granted a space for its archives at the new Carnegie Library of Pittsburgh in the Oakland neighborhood. By 1914, it had its own building nearby. It operated there until 1996, when its expanded quarters in the renovated historic warehouse were completed in Pittsburgh's Strip District. The Society celebrated the opening of the new museum by an Inaugural Gala there on April 26, 1996 for 900 guests.

Located in the Smithsonian wing of the Senator John Heinz History Center, the Western Pennsylvania Sports Museum spans 20,000 square feet (1,900 m2) of exhibit space over two floors. The "museum within a museum" captures the Pittsburgh region's evolution and influence as a sports leader over more than a century, from amateur to pro and across the spectrum of sports. The Sports Museum captures tales of Pittsburgh sports through hundreds of artifacts, more than 70 hands-on interactive exhibits, and 20 audio-visual programs.

The Rockshelter is the oldest site of human habitation in North America, with evidence of man living there for nearly 16,000 years. The site was named a National Historic Landmark in 2005.

Adjacent to the Rockshelter is the historic village. The History Center operates this as a living museum, with re-enactors recreating rural life in the 19th century.

The History Center also operates the Fort Pitt Museum, a two-floor, 12,000-square-foot (1,100 m2) museum that tells the story of Western Pennsylvania’s pivotal role during the French and Indian War, the American Revolution, and as the birthplace of Pittsburgh.

All content from Kiddle encyclopedia articles (including the article images and facts) can be freely used under Attribution-ShareAlike license, unless stated otherwise. Cite this article:
Heinz History Center Facts for Kids. Kiddle Encyclopedia.