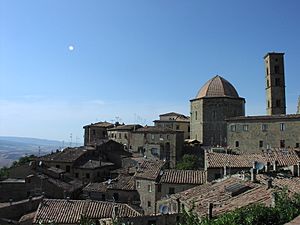 A view of Volterra

Volterra is a town in the Tuscany region of Italy. It is in the province of Pisa. Volterra was once one of the 12 cities in Etruria. In the middle ages it was an independent city until it was conquered by the Florentines and then the Medicis. It has its own cathedral, and is built on top of an ancient volcanic hill.

The city was a Neolithic settlement and an important Etruscan center. It became a "municipium" (a type of Roman city) in the Roman Age. Volterra was attacked and controlled by Florence many times. When the Florentian Republic fell in 1530, Volterra came under the control of the Medici family. It later became part of the Grand Duchy of Tuscany.

The original Etruscan city walls remain in parts, and the remains of the Roman baths, aqueduct and amphitheatre (arena). Visitors to Volterra have to leave their cars outside the town walls, in car parks. 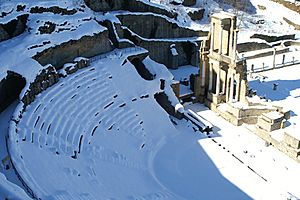 The Medici Villa di Spedaletto is located outside the city in direction of Lajatico. Also near the city, in the Valle Bona area, are excavations of Etruscan tombs.

All content from Kiddle encyclopedia articles (including the article images and facts) can be freely used under Attribution-ShareAlike license, unless stated otherwise. Cite this article:
Volterra Facts for Kids. Kiddle Encyclopedia.