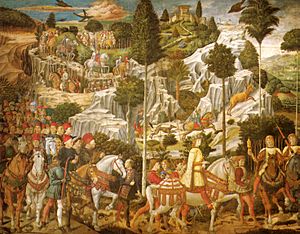 The Procession of the Magi

Benozzo Gozzoli (1420-1498) was an Italian Renaissance painter. He is most famous for a small chapel that he decorated with frescos of the Procession of the Magi.

Benozzo was born in Florence in about 1420. Nothing is known about his parents, or how he started training as an artist. The first that is known of him is that in 1444 he was working with the famous sculptor Lorenzo Ghiberti, who was making the bronze doors for the Baptistry of Florence Cathedral.

In 1447 he started working with the painter Fra Angelico. He went to Rome with Fra Angelico to help paint the Chapel of Pope Nicholas V in the Vatican. In 1449 he was working in his own studio.

For many years Benozzo worked as an assistant to other artists. At that time, he had to make his style match the style of the master, so it is hard to tell his art works apart. When Benozzo painted on his own, his pictures are rich with many details in the clothing, the buildings and the landscape. He was extremely good at painting faces, and many of the people in his pictures seem to be portraits of real people.

Benozzo painted a great procession going around the walls of the chapel, with well-known people painted as the Kings, and members of the Medici family and their friends in the procession. The painting is brightly coloured and full all many interesting details. It is his most famous work.

At St. Augustine's Church, he painted another picture of Saint Sebastian. Saint Sebastian was the saint who people asked to help when plague was making people in the town sick.
Benozzo then painted one of his most important works, a series of frescos in the "chancel" (main chapel) of the church, showing the life of Saint Augustine. There are 17 large pictures, each one telling a scene from the saint's life.

All content from Kiddle encyclopedia articles (including the article images and facts) can be freely used under Attribution-ShareAlike license, unless stated otherwise. Cite this article:
Benozzo Gozzoli Facts for Kids. Kiddle Encyclopedia.