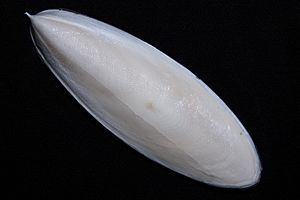 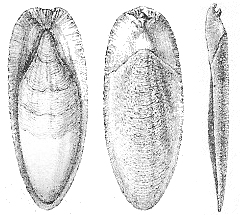 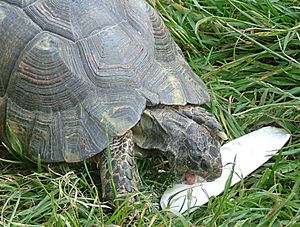 Cuttlebone is composed primarily of aragonite. It is a chambered, gas-filled shell used for buoyancy control; its siphuncle is highly modified and is on the ventral side of the shell. The microscopic structure of cuttlebone consists of narrow layers connected by numerous upright pillars.

Depending on the species, cuttlebones implode at a depth of 200 to 600 metres (660 to 1,970 ft). Because of this limitation, most species of cuttlefish live on the seafloor in shallow water, usually on the continental shelf.

In the past, cuttlebones were used in making polishing powder. The powder was added to toothpaste, and used as an antacid or as an absorbent.

Because cuttlebone is able to withstand high temperatures and is easily carved, it serves as mold-making material for small metal casting for the creation of jewelry and small sculptural objects.

Jewelers prepare cuttlebone for use as a mold by cutting it in half and rubbing the two sides together until they fit flush against one another. Then the casting can be done by carving a design into the cuttlebone, adding the necessary sprue, melting the metal in a separate pouring crucible, and pouring the molten metal into the mold through the sprue. Finally, the sprue is sawed off and the finished piece is polished.

All content from Kiddle encyclopedia articles (including the article images and facts) can be freely used under Attribution-ShareAlike license, unless stated otherwise. Cite this article:
Cuttlebone Facts for Kids. Kiddle Encyclopedia.