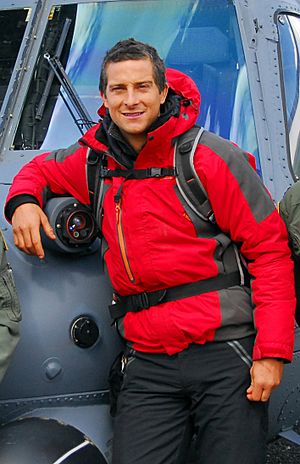 Edward "Bear" Grylls (born 7 June 1974) is a British adventurer. He has been the Chief Scout since 2009. He climbed Mount Everest when he was 23. He broke the record for the youngest British person to climb the mountain. Grylls has been in many television programmes.

Grylls grew up in Donaghadee, County Down and Bembridge, Isle of Wight. He was educated at Eton College and Birkbeck, University of London.

His wife is Shara Cannings Knight and his parents are Sir Michael Grylls and Lady Grylls.

All content from Kiddle encyclopedia articles (including the article images and facts) can be freely used under Attribution-ShareAlike license, unless stated otherwise. Cite this article:
Bear Grylls Facts for Kids. Kiddle Encyclopedia.