Ballynahinch, County Down facts for kids

Ballynahinch (from Irish: Baile na hInse, meaning "settlement of the island/water-meadow") is a town in County Down, Northern Ireland. It had a population of 5,703 people in the 2011 Census.

Ballynahinch was traditionally a market town, although the market still takes place in the square every Thursday. The town lies on the main A24 road from Belfast to Clough, near Newcastle. Facilities in the town include a leisure centre. In recent years a regeneration committee has been formed for the development of the town and the surrounding Spa and Drumaness areas.

Until the 17th century, the area was controlled by the McCartan clan. Around the mid-1600s, Patrick McCartan sold lands around Ballynahinch to Sir George Rawdon, agent to Viscount Conway, and Sir William Petty, a surveyor from Hampshire. Before his death in 1687, Petty leased his interest in the land leaving Sir George in sole possession. He built two corn mills and founded the town with a market square. In 1683 Charles II of England granted the town a patent to hold a Thursday market and two fairs every 1 February and 29 June. Settlers from lowland Scotland increased the population and Ballynahinch grew as a market town with the sale of livestock, corn, potatoes and increasingly, flax was being cultivated. Sir John Rawdon, descendant of Sir George and now the Earl of Moira took up residence in Montalto house in Ballynahinch. He made significant improvements to the estate and to the town by promoting the linen market and causing the market house to be built. By the end of the eighteenth century sales in the market were grossing around £300 per week and the town was prospering. Unfortunately it was about to suffer a setback.

Montalto and Ballynahinch was sold in 1802 to David Ker Esq. who took advantage of the rising fashion for 'taking the waters' amongst tourists with money and developed the medicinal spa wells just over two miles outside the town. The village continued to expand thereafter.

In mid-1920, the Royal Irish Constabulary (RIC) barracks at Ballynahinch was subject to a bomb attack by the Irish Republican Army (IRA).

Ballynahinch is the site of Montalto Estate, Montalto House and The Carriage Rooms. The latter of which was the setting for Disney's The Lodge. 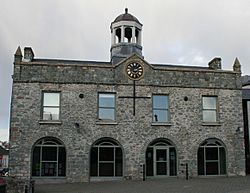 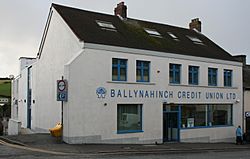 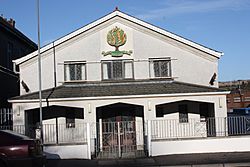 The town is well known for its heavy congestion. A bypass is proposed for the town. Geological surveys were conducted over twenty years ago to determine the route of the bypass but money has never been allocated by the Department of the Environment. In the 1990s various traffic control measures were introduced including the present one way system, however all have failed to cope with the sheer volume of traffic which passes through the town daily, particularly evenings.

In January 2012 The Minister for Regional Development made the following announcement:

"Roads Service approved the stage 2 preferred options report for the scheme, including the recommendation for a preferred line for the A24 Ballynahinch bypass scheme around the eastern outskirts and adjacent to the development limit of the town. That line will run from the junction of the A24 Belfast Road and the A21 Saintfield Road, which is north of the town, to the junction of the A24 Drumaness Road and the B2 Downpatrick Road, which is south of the town, at a distance of approximately 3.1 km. The scheme will involve substantial earthworks to traverse the drumlin topography and ground conditions along the route, which includes the flood plain of the Ballynahinch River. Three substantial structures will be required where the route crosses Moss Road, Crossgar Road and the Ballynahinch river."

There will also be a junction with the B7 Crossgar Road.

However this just shows the advanced nature of the planning rather than imminent construction; The official position is still that construction will take place between 2014 and 2019.

All content from Kiddle encyclopedia articles (including the article images and facts) can be freely used under Attribution-ShareAlike license, unless stated otherwise. Cite this article:
Ballynahinch, County Down Facts for Kids. Kiddle Encyclopedia.