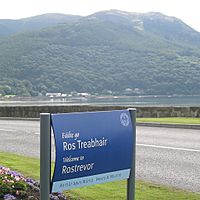 Rostrevor (in Irish: Ros Treabhair, i.e. Trevor’s Wood, also Caislean Ruairi, i.e. Rory's Castle) is a village in County Down, Northern Ireland. It is on Carlingford Lough and the hill of Slieve Martin, at the base of the Mourne Mountains and on the Kilbroney River. It had a population of 2,444 in the 2001 Census. The town is known for its folk music festival, Fiddler's Green Festival. It is in the Newry and Mourne District Council area. The name 'Rostrevor' first appeared circa 1618 and was named after Rose Ussher (the daughter of Henry Ussher, the Anglican Archbishop of Armagh) by her husband Edward Trevor (who came from Brynkynallt in Wales).

All content from Kiddle encyclopedia articles (including the article images and facts) can be freely used under Attribution-ShareAlike license, unless stated otherwise. Cite this article:
Rostrevor Facts for Kids. Kiddle Encyclopedia.