Warrenpoint (Irish: An Pointe) is a small port town and civil parish in County Down, Northern Ireland. It sits at the head of Carlingford Lough, south of Newry, and is separated from the Republic of Ireland by a narrow strait. The town is beside the village of Rostrevor and is overlooked by the Mournes and Cooley Mountains. Warrenpoint sprang up within the townland of Ringmackilroy (from Irish Rinn Mhic Giolla Ruaidh, meaning 'McIlroy's point'), and is locally nicknamed "The Point".

Warrenpoint is known for its scenic location, the Maiden of Mourne festival, the Blues on the Bay music festival, the passenger ferry service between Warrenpoint and Omeath and the nearby Narrow Water Castle. Warrenpoint Port is second in terms of tonnage handled by ports in Northern Ireland. It had a population of 8,732 at the 2011 Census.

What is now Warrenpoint long consisted of a small number of basic dwellings inhabited by people reliant on fishing for their survival and sustenance.

The name "Warrenpoint" is now believed to have been taken from the name of a family that lived here around the latter half of the 18th century. Father Bernard Trainor (who had an interest in place names of the area) mentioned that a family called "Waring" lived here and had a house called "Warings Point". In Irish the place name is Rinn Mhic Ghiolla Rua (McIlroy's Point). The name Ringmackilroy may be seen on some maps. The shortened form is An Phointe. Warrenpoint is often referred to simply as The Point.

Walter Harris in 1744 stated that "Warrings Point" is about a mile or so North West of Rose Trevor.

Fairs were held once a month and a market every Friday. In the mid-19th century, Newry merchants obtained a government grant to create a tidal dock at the village, as prior to 1850 ships of above 150 tonnes could not get further up the lough than Narrow Water.

A railway connection opened on 9 May 1849, increasing Warrenpoint's popularity as a holiday destination. and Warrenpoint became popular as a resort town. Thousands flocked to the resort every year, where most took the passenger ferry to Omeath in County Louth. The Warrenpoint railway station closed in January 1965. The Ferry remains in operation but only in the summer months from May to September.

A bandstand in the town park provided concerts and a swimming pool was built in 1908. The baths were opened by Captain Roger Hall on Whit Monday, 8 June in that year, but they are now closed to the public.

Warrenpoint Pantomime Club, established in 1950, has staged 60 highly popular pantomimes in the town, the latest being "Beauty and the Beast in 2016". 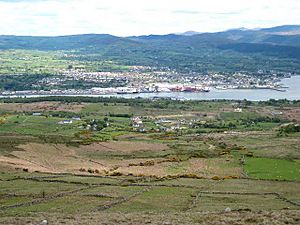 Carlingford Lough separating Northern Ireland and the Republic of Ireland

On 6 February 1921, during the Irish War of Independence, the Irish Republican Army ambushed an Ulster Special Constabulary (USC) patrol in Warrenpoint. The ambush took place on Seaview Road and one USC constable was killed.

On 15 July 1944, two Royal Air Force aircraft (an Airspeed Oxford (LX 598) and a Miles Martinet (MS626) from No. 290 Squadron RAF) were taking part in a civil defence demonstration at Warrenpoint. In misty conditions the planes collided, the pilots only having seen each other at the last minute. The resultant explosion killed all on board, and pieces of the planes fell onto Church Street, Duke Street and Queen Street and into Carlingford Lough. The bodies of the airmen were recovered and taken to the mortuary in Newry.

On 27 August 1979, during "the Troubles", the Provisional Irish Republican Army (IRA) ambushed a British Army convoy at nearby Narrow Water Castle. Eighteen soldiers were killed – the British Army's greatest loss-of-life in a single incident during the conflict. This is often called the Warrenpoint ambush. British soldiers then fired south across the border into County Louth, towards the location of their assumed attackers. This British Army fire killed a young English tourist, William Hudson, who had been watching the scene from Lower Ferryhill Road, where a (broken) memorial to him is now located.

On 12 April 1989, Joanne Reilly was killed by the IRA in a van bomb attack on Warrenpoint Royal Ulster Constabulary base. Inadequate warning was given.

Warrenpoint is classified as a small town by the Northern Ireland Statistics and Research Agency (NISRA) (i.e. with population between 4,500 and 10,000 people). On Census day (29 April 2001) there were 7,000 people living in Warrenpoint. Of these: 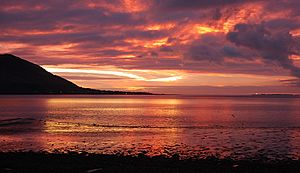 Today a small but modern passenger ferry service operates out of Warrenpoint to the village of Omeath in County Louth. The trip takes about fifteen minutes. Other cruises include trips to Narrow Water Castle, Ross Monument Rostrevor and Bay & Harbour Cruises.

Two small inland lakes, the "Mill Dam" and the "Waterworks" offer a variety of fishing opportunities. A permit is needed to fish these lakes, which are located about 1 mile from the town centre.

Warrenpoint Promenade was used as a backdrop for Bundoran in the film The Butcher Boy, especially the exterior of the Star of the Sea Convent and the Edwardian swimming baths.

The civil parish contains the town of Warrenpoint.

Other schools in the area include Dromore Road Primary School and St Mark's High School.

All content from Kiddle encyclopedia articles (including the article images and facts) can be freely used under Attribution-ShareAlike license, unless stated otherwise. Cite this article:
Warrenpoint Facts for Kids. Kiddle Encyclopedia.