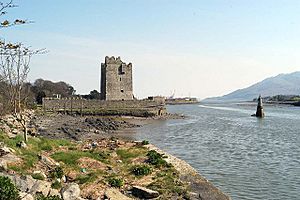 Narrow Water Castle, looking south (the road is to the left of the picture)

Narrow Water Castle (Irish: Caisleán an Chaoil; Ulster-Scots: Narra Wattèr Castle) is a famous 16th-century tower house and bawn near Warrenpoint in Northern Ireland. It is beside the A2 road and on the County Down bank of the Clanrye River, which enters Carlingford Lough a mile to the south. Narrow Water Castle was given into state care in 1956. It is a state care historic monument in the townland of Narrow Water, in Newry and Mourne District Council district, at grid ref: J1256 1939.

Nowadays, cruises past the castle are a regular feature throughout the summer months.

On 27 August 1979, 18 British Army soldiers were killed by a Provisional IRA ambush at Narrow Water Castle (see Narrow Water ambush). It was the greatest single loss of life for the British Army during The Troubles.

The proposed Narrow Water Bridge was to be located close south of the Castle, but in July 2013 Louth County Council announced that the tender process had produced cost estimates significantly in excess of the funding available. They decided therefore to put the project on hold.

All content from Kiddle encyclopedia articles (including the article images and facts) can be freely used under Attribution-ShareAlike license, unless stated otherwise. Cite this article:
Narrow Water Castle Facts for Kids. Kiddle Encyclopedia.