Carlingford Lough (Irish: Loch Cairlinn; Ulster Scots: Carlinford Loch or Cairlinfurd Loch) is a glacial fjord or sea inlet that forms part of the border between Northern Ireland to the north and the Republic of Ireland to the south. On its northern shore is County Down and on its southern shore is County Louth. At its extreme interior angle (the northwest corner) it is fed by the Newry River and the Newry Canal.

The name is derived from the Old Norse Kerlingfjǫrðr, which means "narrow sea-inlet of the hag". Historically it was called Cuan Snámh-Aighneach, Snámh-Aighneach or Cuan Cairlinne in Irish. An older English name was Nury (Newry) Bay.

The Newry River and the Newry Canal link the lough to the nearby city of Newry (the canal continues on towards the River Bann and Lough Neagh; the river, under the name River Clanrye, loops around County Down). The only other glacial fjords in Ireland are Lough Swilly and Killary Harbour.

The area has been a tourist destination since Victorian times when the railway between Dublin and Belfast was opened. Situated approximately halfway between the two cities, the easy access to the area combined with its scenery and sheltered location are still important factors in its popularity today.

The northern shores have extensive mudflats and salt marshes which provide winter feeding areas for the pale-bellied brent goose (Branta bernicla hrota). At the mouth of the lough are several small rock and shingle islands which are breeding areas for terns that feed in its shallow waters. 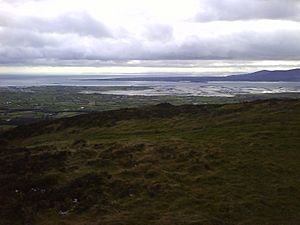 The mouth of Carlingford Lough from Knockree.

The Lough is an Important Bird Area.

The Carlingford Lough Ramsar site (wetlands of international importance designated under the Ramsar Convention), is 830.51 hectares in area, at latitude 54 03 00 N and longitude 06 07 00 W. It was designated a Ramsar site on 9 March 1998. It is a cross-border site. The northern shore is in Northern Ireland and includes the most significant mudflats in the lough, and an area of salt marsh. The southern shore is in the Republic of Ireland. At the mouth of the lough are several small rock and shingle islands which are of importance to terns. The Ramsar Site lies between Killowen Point and Soldiers Point on the northern shores of Carlingford Lough and the landward boundary coincides entirely with that of the Carlingford Lough Area of Special Scientific Interest and the Carlingford Lough Special Protection Area.

Newry is the nearest station located on the Dublin-Belfast railway line with trains running on the Enterprise between Belfast Central, Portadown and Dublin Connolly, whilst other trains may call at additional stations en route to Belfast Great Victoria Street.

Until its closure in the early 1950s, the southern side of the lough was served by the Dundalk, Newry and Greenore (DNG) railway line. Sections of this line now form part of the Carlingford Lough greenway.

The lough is navigable, and its seaward entrance is marked by the Haulbowline Lighthouse, which was built in 1824.

There is a deep water cargo port at Greenore, and a smaller fishing harbour at Carlingford. A commercial marina lies north of Carlingford town, close to the start of the greenway.

All content from Kiddle encyclopedia articles (including the article images and facts) can be freely used under Attribution-ShareAlike license, unless stated otherwise. Cite this article:
Carlingford Lough Facts for Kids. Kiddle Encyclopedia.