Carlingford (from Old Norse Kerlingfjǫrðr, meaning 'narrow sea-inlet of the hag'; Irish: Cairlinn) is a coastal town and civil parish in northern County Louth, Ireland. For the purposes of local government, the town is part of the Dundalk Municipal District. It is situated on the southern shore of Carlingford Lough with Slieve Foy mountain as a backdrop, sometimes known as Carlingford Mountain. It is the main town on the Cooley Peninsula. Located on the R176/R173 roads between Greenore and Omeath village, Carlingford is approximately 27 km north east (by road) from Dundalk (15.6 km directly), 90 km north of Dublin and 11 km south of the border with Northern Ireland. Carlingford won the Irish Tidy Towns Competition in 1988.

Carlingford still retains its medieval layout noticeable by the narrow lanes and small streets. Tholsel Street is where the last of the medieval walled town's gates can still be seen, called "The Tholsel" which apparently was also used as a gaol, on Tholsel Street itself there is still a 16th-century Town House known as the Carlingford Mint.

Carlingford was occupied in the 12th century by Norman knight Hugh de Lacy after laying the foundation stone for a castle on a strategic outcrop of rock. A settlement sprang up close to this fortress. The construction of this castle is ascribed by tradition to King John about the year 1210. The castle is an extensive ruin seated on a solid rock - the sides of which are enclosed by the sea. Mountains rise on the inland side, at the foot of which is a narrow pass which was formerly commanded by the fortress.

Carlingford's strategic position on the east coast of Ireland (along with Carrickfergus and Drogheda) made it an important trading port. This trade led to its relative prosperity during the 14th, 15th and early 16th centuries. Carlingford's early prosperity faltered when, in 1388, the town was burnt to the ground, by a Scots force under the command of Sir William Douglas of Nithsdale. This was a punitive raid, following Irish attacks on Galloway, the Lord of which was Nithsdale's father, Archibald the Grim.

Carlingford received five charters in total; the first in 1326 by Edward II and the last in 1619 under James I. The increased trade encouraged a mercantile class to build in the area, the results of which can be seen today in the remains of the Mint and Taffe's Castle.

In 1637, the Surveyor General of Customs issued a report compiled from accounts of customs due from each port and their "subsidiary creeks". Of the Ulster ports on the list, Carrickfergus was first, followed by Bangor, Donaghadee, and Strangford. Carlingford and Coleraine each had £244 customs due and had equal ranking.

Carlingford was regarded for its Green Finned Oysters which remained its main employment source. The oysters were noted around the world and gained responses when mentioned in related texts.

The 1641 Rising by the Irish of Ulster, the Cromwellian Conquest of 1649, and the subsequent Williamite wars of the 1690s all took their toll on the local economy. As recorded in the Journal of Isaac Butler, Carlingford the town was in a "state of ruin" by 1744. However, the final nail in coffin was the desertion to open water of the prosperous herring shoals that occupied the lough by the early 18th century.

Carlingford's inability to develop a heavy industry allowed its mediaeval layout and archaeological artefacts to remain relatively intact. The area was opened up to tourism in the 1870s by the Dundalk, Newry and Greenore railway, which passed through Carlingford. This line closed in 1951. These transport links led to tourism being a key source of employment. Fishing was also important economically; particularly oysters and crabs from the nearby harbour. The town hosts the annual Carlingford Oyster Festival usually held in August. A passenger ferry operates daily out of the village of Omeath, 5 km (3.1 mi) away, during the summer months. 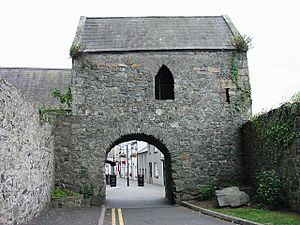 Carlingford railway station opened on 1 August 1876, but finally closed on 1 January 1952 when the Dundalk, Newry & Greenore Railway ceased operations. In 1948 the film 'Saints and Sinners' used various locations around Carlingford including a scene at the beginning at the station of a DN&GR train arriving.

Bus Éireann route 161 operates Monday to Saturday, providing seven journeys to Dundalk via Greenore and four journeys to Newry via Omeath. This service does not operate on Sundays or Bank Holidays. 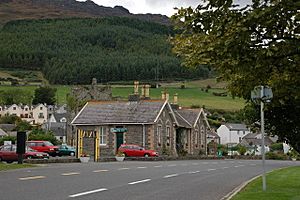 Former railway station on the Dundalk, Newry and Greenore Railway.

Carlingford also has a marina.

All content from Kiddle encyclopedia articles (including the article images and facts) can be freely used under Attribution-ShareAlike license, unless stated otherwise. Cite this article:
Carlingford, County Louth Facts for Kids. Kiddle Encyclopedia.