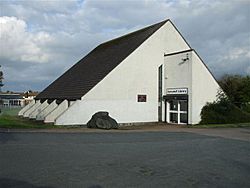 Carryduff (from Irish: Ceathrú Aodha Dhuibh, meaning "Black Hugh's quarter") is a small town and townland in County Down, Northern Ireland, about 10 kilometres (6.2 mi) south of Belfast city centre. It had a population of 6,961 people in the 2011 Census.

Most of the settlement lies within the townland of Carryduff, although part of it extends into the neighbouring townlands of Killynure and Mealough.

One of the earliest references to the settlement dates from 1622, where its anglicised name is written as Carrow-Hugh-Duffe. The original village formed where six roads and a river crossed, and is the site of the ancient Queen's Fort Rath. The road south from Belfast (the A24) climbs out of a gap in the Castlereagh Hills, and splits at Carryduff, one fork (the A7) continuing to Downpatrick (via Saintfield and Crossgar), the other fork (A24) continuing via Ballynahinch to Newcastle towards Kilkeel. In addition, the road from the Ards Peninsula, Newtownards and Comber (the B178) crosses here en route to Hillsborough in the west. All six roads cross the small Carryduff River here (which flows northwards to eventually join the River Lagan at Minnowburn).

The good road connections (note that Carryduff was never at any time connected to the Irish rail network) and proximity to Belfast made the town an ideal site for overspill development from the city in the 1960s. This period saw numerous housing developments (swallowing Queen's Fort Rath), the construction of the Town and Country Shopping Centre, and Carryduff Primary School, leading into the 1970s with the building of the Killynure housing estate by the Northern Ireland Housing Executive. Ribbon development along one side of the northbound A24 took place adjacent to the Immaculate Heart of Mary Roman Catholic Church and St Joseph's Primary School, with the Knockbracken Reservoir on the other side.

The 1980s saw expansion continue with Carryduff becoming a commuter town for Belfast workers. Developments continued into the 1990s and included Carryduff Library, Carryduff Shopping Centre, including shops such as Wellworths (now SuperValu) and Ireland-wide stationery and book shop Eason (previously NPO). Numerous further housing developments have been erected on former green-field sites, as well as the Lough Moss Leisure Centre. These developments saw the Carryduff River placed inside a culvert for much of its journey through the town. Another big development of was the Brackenvale petrol station on the Saintfield Road, which has an Indian restaurant, a McDonald's and a KFC opposite.

Very little green belt land now remains between Carryduff and the southern border of Belfast, the 1980s having seen the former Matthew Stop Line breached. Carryduff's original raison d'être as a focus of routes on the southern approach to Belfast has led to something of a transport problem, as the road network struggles to cope with commuter traffic, resulting in large amounts of rush hour congestion. Urban Citybus (Metro) routes did not extend out to Carryduff, leaving Ulsterbus services from Belfast to Downpatrick and Newcastle as the only public transport. Culturally, as it moved beyond its farming roots in the latter half of the 20th century, A classic suburban satellite town, there is no cinema, theatre or nightclub in the town. It is also the only town in Northern Ireland without a bank.

The local Carryduff Gaelic Athletic Club is based at Pairc Aodha Dhuibh. Carryduff also has 3 local men's football teams who all play from Lough Moss pitches in the town, they are Carryduff F.C., Carryduff Colts F.C. and Carryduff Athletic F.C.

Carryduff is home to Ceathrú Aodha Dhuibh CLG. It was in 1971 that a group of parents, concerned at the lack of playing facilities in the fast growing southern suburb of Belfast, came together to form a schoolboys Gaelic Football team. The prime movers in the club were Harry McEvoy, Paddy McEvoy and Martin McAteer, and within a couple of years a full G.A.A. club had come into being with a team entered in the East Down League. The team traditionally wears Blue with a gold hoop. Carryduff has had many county players over the years with Greg Blaney, Neil Collins, Mark McCartan and John Kelly featured prominently in Down’s All-Ireland accomplishments in the Nineties.

Carryduff also has 2 local men's football teams who all play from Lough Moss pitches in the town, they are Carryduff Colts F.C. and Carryduff Athletic F.C.

All content from Kiddle encyclopedia articles (including the article images and facts) can be freely used under Attribution-ShareAlike license, unless stated otherwise. Cite this article:
Carryduff Facts for Kids. Kiddle Encyclopedia.