Kids Encyclopedia Facts
Not to be confused with Bann Bridge.

Banbridge ( ban-BRIJ) is a town in County Down, Northern Ireland. It lies on the River Bann and the A1 road and is named after a bridge built over the River Bann in 1712. It is situated in the civil parish of Seapatrick and the historic barony of Iveagh Upper, Upper Half. The town began as a coaching stop on the road from Belfast to Dublin and thrived from Irish linen manufacturing. The town was home to the headquarters of the former Banbridge District Council. Following a reform of local government in Northern Ireland in 2015, Banbridge became part of Armagh City, Banbridge and Craigavon Borough Council. It had a population of 16,637 in the 2011 Census.

The town's main street is very unusual, rising to a steep hill before levelling out. In 1834 an underpass was built as horses with heavy loads would faint before reaching the top of the hill. It was built by William Dargan and is officially named 'Downshire Bridge', though it is often called "The Cut".

Banbridge, home to the "Star of the County Down", is a relatively young town, first entering recorded history around 1691 during the aftermath of the struggle between William III and James II. An Outlawry Court was set up in the town to deal with the followers of James. The town grew up around the site where the main road from Belfast to Dublin crossed the River Bann over an Old Bridge which was situated where the present bridge now stands.

The town owes its success to flax and the linen industry, becoming the principal linen producing district in Ireland by 1772 with a total of 26 bleachgreens along the Bann. By 1820 the town was the centre of the 'Linen Homelands' and its prominence grew when it became a staging post on the mail coach route between Dublin and Belfast. A gift of £500 from the Marquis of Downshire around this time helped to alleviate some problems with the steepness of the road and paid for significant improvements. This industry has now greatly diminished in prominence, but Banbridge still has three of the major producers in Ulster; Weavers, Thomas Ferguson & Co, and John England Irish Linen. 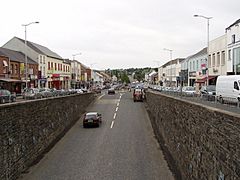 'The Cut' from above 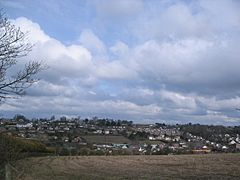 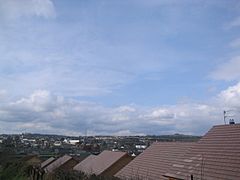 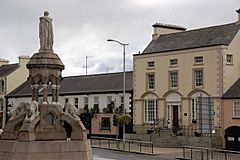 The monument to Francis Crozier

Banbridge has staged an annual busking competition and music festival called Buskfest since 2004. Performers often travel long distances to participate. The competition closes with an evening concert composed of performances by world-famous artists.

Recently, Banbridge has been twinned with Ruelle in France.

Like the rest of Ireland, the Banbridge area has long been divided into townlands, whose names mostly come from the Irish language. Banbridge sprang up in a townland called Ballyvally. Over time, the surrounding townlands have been built upon and they have lent their names to many streets, roads and housing estates. The following is a list of townlands within Banbridge's urban area, alongside their likely etymologies:

Banbridge is on the A1 main road between Belfast and Newry. The nearest railway station is Scarva on Northern Ireland Railways' Belfast–Newry railway line, about 4 miles (6.4 km) west of Banbridge.

The Great Northern Railway took over both companies in 1877 and opened a branch line from Banbridge to Ballyroney in 1880. In 1906 the GNR opened an extension from Ballyroney to Castlewellan, where it connected with a new Belfast and County Down Railway branch line to Newcastle, County Down.

In 1953 the governments of Northern Ireland and the Irish Republic jointly nationalised the GNR as the GNR Board. On 1 May 1955 the GNRB closed Banbridge's lines to Scarva and Castlewellan. Banbridge (BLBR) railway station closed on 29 April 1956, when the GNRB closed the line from Knockmore Junction.

In 1920, an Ireland versus Scotland international hockey match was played at Banbridge.

The Banbridge Hockey Club won the EuroHockey Club Champions Trophy in 1985, becoming the second team from Ireland (after Cookstown HC in 1981) to win the competition. 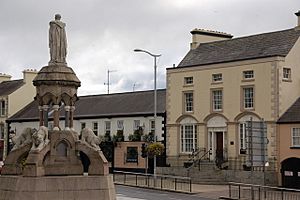 The monument to Francis Crozier

All content from Kiddle encyclopedia articles (including the article images and facts) can be freely used under Attribution-ShareAlike license, unless stated otherwise. Cite this article:
Banbridge Facts for Kids. Kiddle Encyclopedia.