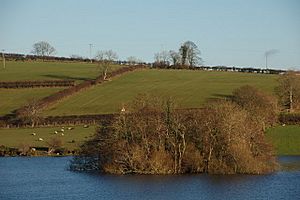 Loughbrickland Crannóg is a Bronze Age man-made island known as a crannóg, four miles (6.5 km) south west of Banbridge, County Down, Northern Ireland. It is situated in the middle of the lough, 1 mile from the village of Loughbrickland. The crannóg in Loughbrickland is a Scheduled Historic Monument in the townland of Drumnahare, in Banbridge District, at grid reference J1113 4118. It is easily visible from the south-bound carriageway of the trunk A1 Belfast-Dublin route, just past the B3 Rathfriland exit.

Loughbrickland Crannóg, set in the middle of the lake, was surrounded by a row of stakes and partly built up of occupation debris.

The crannóg is a man-made island dating from around the Late Bronze Age period (from approx. 2000 to 500 BC). It was inhabited by the Magennis family in the 17th century, who had vacated a castle that is thought to have been located on the lake shore. It was the site of a 1642 skirmish in the Irish Rebellion when it was used as a hiding place by rebels.

All content from Kiddle encyclopedia articles (including the article images and facts) can be freely used under Attribution-ShareAlike license, unless stated otherwise. Cite this article:
Loughbrickland Crannóg Facts for Kids. Kiddle Encyclopedia.