Castle Ward is an 18th-century National Trust property located near the village of Strangford, in County Down, Northern Ireland, in the townland of the same name. It overlooks Strangford Lough and is 7 miles from Downpatrick and 1.5 miles from Strangford.

Castle Ward is open to the public and includes 332 hectares (820 acres) of landscaped gardens, a fortified tower house, Victorian laundry, theatre, restaurant, shop, saw mill and a working corn mill. It has a shore on Strangford Lough. From 1985 to 2010 it has also hosted Castleward Opera, an annual summer opera festival.

The most interesting aspect of Castle Ward is that of its dual architecture, representing the differing tastes of Lord Bangor and his wife, Lady Ann Bligh. While the entrance side of the building is done in a classical Palladian style with columns supporting a triangular pediment, the opposite side is Georgian Gothic with pointed windows, battlements and finials. This difference in style continues throughout the interior of the house with the divide down the centre. 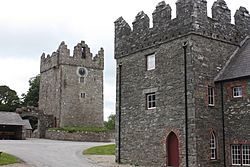 There is a tower house in the estate's farmyard, built as a defensive structure during 1610 by Nicholas Ward.

Castle Ward has been the home of the Ward family since ca. 1570. Known originally as Carrick na Sheannagh and owned by the Earls of Kildare, it was bought by Bernard Ward, father of Sir Robert Ward, Surveyor-General of Ireland. The 850 acre walled demesne also dates from the 16th century. The Ward family built a succession of homes in their estate; Old Castle Ward, built about 1590 near to Strangford Lough, still survives, but a mansion built about 1720 by Judge Michael Ward was demolished about 1850, although some of the associated landscaping remains.

The architect of the current building, built during the early 1760s for Michael Ward's son Bernard Ward, 1st Viscount Bangor is unknown, although he may have come from the Bristol area, with which the Ward family had associations. It may have been James Bridges who practiced in Bristol between 1757 and 1763 and whose work there has some similarity to Castle Ward.

The property was inherited by a settlement made in 1748 by Bernard Ward's eldest son, Nicholas, 2nd Viscount Bangor, who was clearly insane. When his younger brother, Edward, died in 1812, leaving a young son, the youngest brother Robert took the opportunity to relocate the insane Nicholas into a smaller house in Downpatrick and strip Castle Ward of everything valuable. The house stood empty until the death of Nicholas in 1827, when it was inherited by Edward's son, now the 3rd Viscount. He and his descendants restored the building and its furnishings, but on the death of the 6th Viscount in 1950 the house and estate were given in lieu of death duties to the Government of Northern Ireland, who presented the house and its gardens to the National Trust in 1952.

On 10 February 1973, Leonard O'Hanlon (age 23) and Vivienne Fitzsimmons (age 17), both members of the Provisional Irish Republican Army, were killed when the bomb they planted exploded prematurely in the grounds of Castle Ward estate.

All content from Kiddle encyclopedia articles (including the article images and facts) can be freely used under Attribution-ShareAlike license, unless stated otherwise. Cite this article:
Castle Ward Facts for Kids. Kiddle Encyclopedia.