Dromore, County Down facts for kids

Kids Encyclopedia Facts
Not to be confused with Dromara or Dromore, County Tyrone.

Dromore (from Irish: Droim Mór, meaning "large ridge") is a small market town and civil parish in County Down, Northern Ireland. It lies within the local government district of Armagh City, Banbridge and Craigavon. It is 19 miles (31 km) southwest of Belfast, on the A1 Belfast–Dublin road. The 2011 Census recorded a population of 6,003.

The town's centre is Market Square, which has a rare set of stocks. It is in the old linen manufacturing district. Dromore has the remains of a castle and earthworks, although these have modern buildings surrounding them, a large motte and bailey or encampment (known locally as "the Mound"), and an earlier earthwork known as the Priest's Mount on the Maypole Hill.

The name Dromore is an anglicisation of the Irish Druim Mór (modern Irish Droim Mór) meaning "large ridge", with historic anglicisations including Drumore, Drummore and Drummor.

The town features a well-preserved Norman motte and bailey that was constructed by John de Courcy in the early 13th century, shortly after the Norman invasion of Ireland. Known locally as "the Mound", the fort occupies a prominent site to the east of the town centre and has views along the valley of the River Lagan. Dromore remained under Anglo-Norman control until it was captured and destroyed by Edward Bruce during the Irish-Bruce wars of 1315. 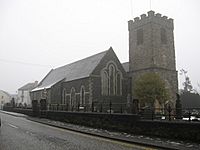 Dromore Cathedral of Christ the Redeemer

The town and cathedral were wholly destroyed during the Irish Rebellion of 1641, and the present church was built by Bishop Jeremy Taylor in 1661, who is buried there. Also buried in the cathedral is Thomas Percy, another famous bishop of the diocese, who laid out the fine grounds of the palace. A monument to Thomas Percy stands in the Town Park.

Jacobites under command of Richard Hamilton, and rival Williamites fought a battle here on 14 March 1689. The battle took place about a mile out of the town on the Milebush Road and was known as the Break of Dromore. The Jacobites routed the Williamites and they fled in disorder, leaving 400 dead. After this Break of Dromore the Jacobites did not meet any resistance while advancing northwards and occupying Belfast.

Dromore had its own railway station from 1863 to 1956. The Banbridge, Lisburn and Belfast Junction Railway (BLB) through Dromore opened in 1863. Its line was a branch that joined the Ulster Railway main line Knockmore Junction, giving Dromore a direct link to Lisburn and Belfast Great Victoria Street. In 1876 the Ulster Railway became part of the new Great Northern Railway, which took over the BLB company in 1877. In 1953 the railway was nationalised as the GNR Board, which closed the line through Dromore on 29 April 1956.

For more information see The Troubles in Dromore, which includes a list of incidents in Dromore during "the Troubles" resulting in two or more fatalities. 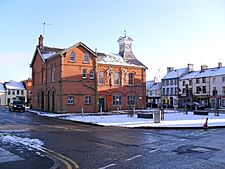 The Dromore Town Centre Development Plan, published in July 2003, outlined that of the 190 units within Dromore Town Centre, over one quarter were vacant. This is in spite of recent population growth in the town; a result of the proximity to the A1 road and resultant commuting access to Greater Belfast.

The green-field development in recent years has mostly been around the edges of the town, and the doughnut effect has led to these houses being disconnected from the town centre. The population of Dromore tends to travel to nearby Banbridge or Sprucefield to shop, which has caused the high levels of obvious dereliction.

The plan highlights the under use of the River Lagan as a resource in the town, as well as the poorly used public space around the Town Hall in the Market Square. The square's 18th Century layout is protected, however it is identified as a traffic problem, which is exacerbated by poor parking provision and enforcement of parking restrictions. In 2008, the area surrounding the Town Hall was cleared to facilitate the construction of leisure space. The project was completed in six months and now has benches and pathways in place of a small car park. The general aesthetics of the site have also been improved. 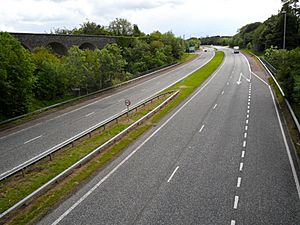 The A1 Dromore by-pass in 2011. The disused railway viaduct can be seen on the left

Dromore is well served by the Translink Goldline Express bus service 238, running between Belfast and Newry. Translink Ulsterbus service 38 links the town with Belfast, Banbridge and Lisburn (bypassed by express services). However the 38 can stop at all urban and rural bus stops, adding roughly an extra thirty minutes to the Belfast bound journey.

It is a short drive from Dromore to Belfast (about 20–25 minutes off-peak), Lisburn and Banbridge due to the high-quality A1 road/M1 motorway. Belfast International Airport is about 40 minutes away using the A26 (Moira-Antrim road) while Dublin Airport is around seventy to eighty minutes away using the A1/M1. The town, which has been on the main Belfast to Dublin route for centuries, was bypassed in 1972.

The area is also linked with Lurgan and Ballynahinch by the B2 Lurgan Road and B2 Ballynahinch Road respectively. Surrounding villages, such as Kinallen, Dromara and Donaghcloney, are served by unclassified rural routes.

In 2009 a grade-separated junction featuring an underpass was constructed at the junction of the B2 Banbridge Road, A1 dual-carriageway and the Rowantree Road. It was one of four junctions that were grade separated along the route as part of £30 million of safety improvements. It followed the successful construction of a similar style junction at the B2 Hillsborough Road/A1 junction on the northern end of the town.

The dialling code for Dromore, like the rest of Northern Ireland, is 028. Local landline numbers typically appear in the format 028 9269 xxxx. The town's local telephone exchange falls under the Lisburn telephone exchange code, which prior to the Big Number Change in 2000, used area code 01846. 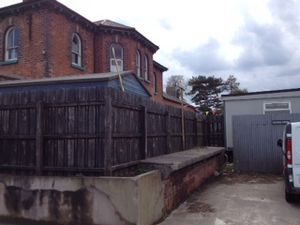 The remnants of the platform at the former Dromore Railway Station.

Dromore railway station was part of the GNR which was closed by the Ulster Transport Authority.

Dromore sprang up within the townland of the same name. The following is a list of townlands that are now within the town's urban area, alongside their likely etymologies:

Past and present notable residents include:

Despite the town's small population, Dromore has a multitude of sport teams and venues.

The most prominent sports in the town are association football and rugby union, with cycling, hockey, lawn bowls, and athletics having some popularity also.

Dromore has a number of cycling clubs in the local area including Dromore Cycling Club, West Down Wheelers, and Dromara Cycling Club. The town is also home to a number of former national and international event winning cyclists including Terry Mackin, double Silver medalist at the National Track Championships and a Bronze medal in the Kilometre Time Trial event in the UCI World Masters Track Championships, Gareth Rogers, two time All Ireland Hill Climb Champion.

Seamus Downey competed in the individual road race event at the 1984 Summer Olympics, his son Sean Downey winning a Bronze medal in the 2010 Commonwealth Games in the team pursuit as part of the Northern Ireland team and riding for the An Post–Chain Reaction team between 2012 and 2015, and Mark Downey competing at the 2015 UEC European Track Championships in the points race and team pursuit. Mark won the gold medal at the 2016–17 UCI Track Cycling World Cup, Round 2 in Apeldoorn in the points race. He also won the third round of the World Cup points race held in Cali, Colombia and picked up a Silver in the Madison with his team mate Felix English. Mark concluding his 2017 World Cup campaign by winning the Madison in Los Angeles Round 4 and was overall series winner in the points race.

The town has one intermediate football team, Dromore Amateurs F.C., who compete in a regional league and play home matches at Ferris Park.

Dromore also has its very own grassroots football set-up: Dromore Amateurs Youth Football Club, which coaches kids from all over the surrounding district. Having only recently formed in 2005/06, the Club has continued to grow from strength to strength and now cater for an impressive 200+ kids from ages 5 to 17.

Football is also very popular as a social sport, with many groups playing on a daily basis at both municipal sports facilities at Ferris Park and Dromore Community Centre.

Rugby union is represented through Dromore Rugby Football Club, who have had some success in recent years. The club are based on Barban Hill in the town and have three rugby pitches and a clubhouse on that site. The club's 1st XV team presently compete in the Ulster Branch of the IRFU's Qualifying League.

The town is represented on a provincial level in ladies field hockey by Dromore Ladies Hockey Club, whose 1st XI competed in the Ulster Women's Hockey Union Senior One league for the 2010/11 season, having won the Ulster Women's Hockey Union "Club of the Year" title in 2007/8. The club have six senior teams and junior teams at all age levels, playing home matches and training at Ferris Park.

The Gaelic games of hurling and camogie are catered for at the Ballela Club in the town land of Ballela near Dromore.

The main sports facility in the town is Dromore Community Centre (also known as Holm Park), which offers two grass soccer pitches, two tennis courts and a bowling green. In addition to this, the main building contains a gymnasium, an indoor multipurpose hall and two squash courts (the squash courts are now closed for re-purposing). The secondary facility is Ferris Park, named after local Olympian Sam Ferris, which provides a full-sized sand-based floodlit hockey pitch, two floodlit tennis courts, a grass soccer pitch and a changing pavilion. Both are maintained by Armagh City, Banbridge and Craigavon Borough Council.

All content from Kiddle encyclopedia articles (including the article images and facts) can be freely used under Attribution-ShareAlike license, unless stated otherwise. Cite this article:
Dromore, County Down Facts for Kids. Kiddle Encyclopedia.