The daughter of Patrick Brontë, a poor Irish clergyman in the Church of England, Anne Brontë lived most of her life with her family at the parish of Haworth on the Yorkshire moors. She also attended a boarding school in Mirfield between 1836 and 1837. At 19 she left Haworth and worked as a governess between 1839 and 1845. After leaving her teaching position, she fulfilled her literary ambitions. She published a volume of poetry with her sisters (Poems by Currer, Ellis, and Acton Bell, 1846) and two novels. Agnes Grey, based upon her experiences as a governess, was published in 1847. Her second and last novel, The Tenant of Wildfell Hall, which is considered to be one of the first sustained feminist novels, appeared in 1848. Like her poems, both her novels were first published under the masculine pen name of Acton Bell. Anne's life was cut short when she died of what is now suspected to be pulmonary tuberculosis at the age of 29.

Partly because the re-publication of The Tenant of Wildfell Hall was prevented by Charlotte Brontë after Anne's death, she is not as well known as her sisters. However, her novels, like those of her sisters, have become classics of English literature. 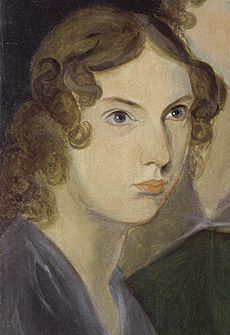 Anne, from a group portrait by her brother Branwell

Anne's father, Patrick Brontë (1777–1861), was born in a two-room cottage in Emdale, Loughbrickland, County Down, Ireland. He was the oldest of ten children born to Hugh Brunty and Eleanor McCrory, poor Irish peasant farmers.

Anne's mother, Maria Branwell (1783–1821), was the daughter of Thomas Branwell, a successful, property-owning grocer and tea merchant in Penzance and Anne Carne, the daughter of a silversmith. The eleventh of twelve children, Maria enjoyed the benefits of belonging to a prosperous family in a small town. 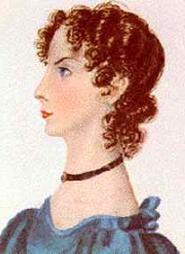 Anne's studies at home included music and drawing. Anne, Emily and Branwell had piano lessons from the Keighley church organist.

Reading fed the children's imagination. Their creativity soared after their father presented Branwell with a set of toy soldiers in June 1826. They gave the soldiers names and developed their characters, which they called the "Twelves". This led to the creation of an imaginary world: the African kingdom of "Angria" which was illustrated with maps and watercolour renderings. The children devised plots about the inhabitants of Angria and its capital city, "Glass Town", later called Verreopolis or Verdopolis.

The fantasy worlds and kingdoms gradually acquired the characteristics of real world—sovereigns, armies, heroes, outlaws, fugitives, inns, schools and publishers. The characters and lands created by the children had newspapers, magazines and chronicles which were written in extremely tiny books, with writing so small it was difficult to read without a magnifying glass. These creations and writings were an apprenticeship for their later, literary talents.

Around 1831, when Anne was eleven, she and Emily broke away from Charlotte and Branwell to create and develop their own fantasy world, "Gondal". Anne was particularly close to Emily especially after Charlotte's departure for Roe Head School, in January 1831. When Charlotte's friend Ellen Nussey visited Haworth in 1833, she reported that Emily and Anne were "like twins", "inseparable companions".

Anne took lessons from Charlotte, after she returned from Roe Head. Charlotte returned to Roe Head as a teacher on 29 July 1835 accompanied by Emily as a pupil; her tuition largely financed by Charlotte's teaching. Within a few months, Emily unable to adapt to life at school, was physically ill from homesickness. She was withdrawn from school by October, and replaced by Anne.

Aged 15, it was Anne's first time away from home, and she made few friends at Roe Head. She was quiet and hard working, and determined to stay and get the education she needed to support herself. She stayed for two years, winning a good-conduct medal in December 1836, and returning home only during Christmas and summer holidays.

Anne obtained a second post as governess to the children of the Reverend Edmund Robinson and his wife Lydia, at Thorp Green Hall, a comfortable country house near York. Anne was employed at Thorp Green Hall from 1840 to 1845. The house appeared as Horton Lodge in her novel Agnes Grey. Anne had four pupils: Lydia, aged 15, Elizabeth, aged 13, Mary, aged 12, and Edmund, aged 8. Initially, she encountered similar problems as she had experienced at Blake Hall. Anne missed her home and family, commenting in a diary paper in 1841 that she did not like her situation and wished to leave it. Her quiet, gentle disposition did not help. However, despite her outwardly placid appearance, Anne was determined and with experience, made a success of her position, becoming well liked by her employers. Her charges, the Robinson girls, became lifelong friends.

For the next five years, Anne spent no more than five or six weeks a year with her family, during holidays at Christmas and in June. The rest of her time was spent with the Robinsons at Thorp Green. She was obliged to accompany them on annual holidays to Scarborough. Between 1840 and 1844, Anne spent around five weeks each summer at the coastal town and loved the place. A number of locations in Scarborough were the setting for Agnes Grey's final scenes and for Linden-Car village in The Tenant of Wildfell Hall.

Whilst working for the Robinsons, Anne and her sisters considered the possibility of setting up a school. Various locations including the parsonage were considered. The project never materialised and Anne chose to return to Thorp Green. She came home on the death of her aunt in early November 1842 while her sisters were in Brussels. Elizabeth Branwell left a £350 legacy (equivalent to £30,000 in 2021) for each of her nieces.

Back at the parsonage 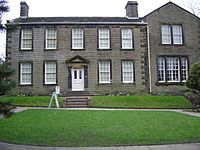 Anne and Branwell taught at Thorp Green for the next three years. Branwell entered into a secret relationship with his employer's wife, Lydia Robinson. When Anne and her brother returned home for the holidays in June 1846, she resigned her position. While Anne gave no reason for leaving Thorp Green, it is thought she wanted to leave on becoming aware of the relationship between her brother and Mrs Robinson. Branwell was dismissed when his employer found out about the relationship. Anne retained close ties to Elizabeth and Mary Robinson, exchanging letters even after Branwell's disgrace. The Robinson sisters came to visit Anne in December 1848.

Anne took Emily to visit some of the places she had come to know and love in the five years spent with the Robinsons. A plan to visit Scarborough fell through and instead the sisters went to York where Anne showed her sister York Minster. 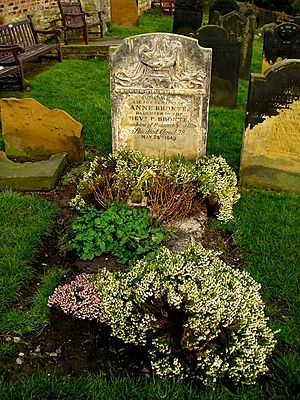 Anne Brontë's grave at Scarborough. The flowering plants have now been replaced by a slab.

Conscious and calm, Anne died at about two o'clock in the afternoon, Monday, 28 May 1849.

Over the following days, Charlotte made the decision to "lay the flower where it had fallen". Anne was buried, not in Haworth with the rest of her family, but in Scarborough. The funeral was held on Wednesday 30 May which did not allow time for Patrick Brontë to make the 70-mile (110 km) journey, had he wished to do so. The former schoolmistress at Roe Head, Miss Wooler, was in Scarborough and she was the only other mourner at Anne's funeral. She was buried in St Mary's churchyard, beneath the castle walls, overlooking the bay. C

In 2011, the Brontë Society installed a new plaque at Anne Brontë's grave. Due to weathering and erosion, the original gravestone had become illegible at places and could not be restored. The original stone was left undisturbed, while the new plaque, laid horizontally, interpreted the fading words of the original, and also added a correction to the remaining error on the headstone (Anne's age at death). In April 2013, the Brontë Society held a dedication and blessing service at the gravesite to mark the installation of the new plaque.

The books of Anne Brontë:

All content from Kiddle encyclopedia articles (including the article images and facts) can be freely used under Attribution-ShareAlike license, unless stated otherwise. Cite this article:
Anne Brontë Facts for Kids. Kiddle Encyclopedia.