Kilkeel (from Irish: Cill Chaoil, meaning "church of the narrow") is a small town, civil parish and townland (of 554 acres) in County Down, Northern Ireland. It lies within the historic barony of Mourne. Kilkeel town is the main fishing port on the Down coast, and its harbour houses one of the largest fishing fleets in Ireland. It had a population of 6,887 people according to the 2011 Census. The town contains the ruins of a 14th-century church and fort, winding streets and terraced shops.

Kilkeel town sits on a plain south of the Mourne Mountains, west of where the Kilkeel River flows south into the North Channel. The town is centred in the townland of Magheramurphy (from Irish Machaire Mhurchaidh, meaning 'Murphy's plain'), and extends into the neighbouring townlands of:

Altogether there are 69 townlands in the civil parish and barony. 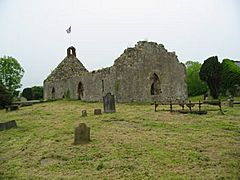 Kilkeel takes its name from the old church overlooking the town, it being the anglicised version of the Gaelic 'Cill Chaoil' meaning "Narrow Church" or "The Church of/in the Narrow Place." The name may be drawn from the church location on a narrow site above the town.

The cemetery attached to the church was used for burials until 1916. The last burials at the cemetery were victims of a collision between two steamers the Retriever and the SS Connemara in Carlingford Lough.

On 30 May 1918 a fleet of Kilkeel fishing boats was sunk by the U-boat UB-64 under the command of Otto von Schrader. The boats sunk, 12 miles off the coast of County Down, included the Jane Gordon, Cyprus, Never Can Tell, St Mary, Sparkling Wave, Lloyds, Marianne Macrum and the motor vessel Honey Bee. Only two boats, Moss Rose and Mary Joseph, were not sunk and the crews returned to port on those boats. The Mary Joseph (N55) is now in the Ulster Folk and Transport Museum.

A Local History Group that covers both the town of Kilkeel and the Mourne region was set up in the 1980s producing a set of seven periodicals called "The 12 Miles of Mourne". A book on Hanna's Close, a clachan of houses in Aughnahoory townland 1 mile outside of Kilkeel, that covers the history of the region up to 1798 was self-published in 2008.

Kilkeel is classified as a small town by the Northern Ireland Statistics and Research Agency (i.e. with population between 4,500 and 14,000 people). On Census day (29 April 2011), there were 6,887 people living in Kilkeel. Of these:

Kilkeel now sits within the administrative area of Newry and Mourne, which is recorded in the 2001 census as being 80.6% Catholic. For more details see: NI Neighbourhood Information Service

All content from Kiddle encyclopedia articles (including the article images and facts) can be freely used under Attribution-ShareAlike license, unless stated otherwise. Cite this article:
Kilkeel Facts for Kids. Kiddle Encyclopedia.