Downpatrick and County Down Railway facts for kids

The railway's Downpatrick terminus, located at the foot of Down Cathedral, contains an award-winning museum which houses a variety of railway artefacts. These range from restored locomotives and coaches to historic railway relics and buildings from across the whole island.

It is the only operational Irish standard gauge (5' 3") heritage railway in the whole of Ireland.

The railway first arrived in Downpatrick on 23 March 1859, with the completion of the Belfast and County Down Railway's mainline from Belfast Queen's Quay railway station. The line originally terminated at Downpatrick, but in 1869 a separate company- the Downpatrick, Dundrum & Newcastle Railway- built an extension to the seaside town of Newcastle. The BCDR took over the DDNR in 1881, though this unforeseen extension had created an inconvenience wherein trains running between Belfast and Newcastle had to run around at Downpatrick to continue their journey in a fashion similar to Kilkenny railway station on the Great Southern and Western Railway. The opportunity arose in 1892 to end this cumbersome practice with the opening of the Downpatrick, Killough and Ardglass Railway and, with it, Downpatrick Loop Platform. The DKAR was built and operated by the BCDR, and branched off from their mainline about half a kilometre from the new Loop Platform. In conjunction with this, a 'Loop Line' was constructed which enabled trains to bypass the main Downpatrick Station, calling instead at the Loop Platform where passengers intending for Downpatrick could switch to a local train and carrying on without having to run around.

Following the 1945 Ballymacarrett rail crash and the resultant £80,000 (The equivalent to £3,376,000 in 2018) it had to pay in compensation, the Belfast and County Down Railway was financially ruined. This was a deciding factor in the nationalisation of the company as part of the Ulster Transport Authority in 1948. The UTA closed all BCDR lines except the Bangor branch a mere two years after taking them over, and so on Sunday 15 January 1950, all the railways around Downpatrick were closed. The tracks were lifted in 1953 and Downpatrick station was handed over to the UTA's bus division, becoming Ulsterbus in 1968. Ulsterbus moved out of the station in 1975 and it was demolished shortly after, erasing the last trace of the railway in Downpatrick town.

Local architect Gerry Cochrane M.B.E. was inspired to start the scheme after taking a walk along the route of the line, and by 1982 had gained support to rebuild part of the line as a heritage steam railway from the local council. Lord Dunleath, whose father had purchased the railway trackbed adjacent to his estate after the closure of the BCDR in Downpatrick, gave the newly formed society a package of land on which to build the line and station for a peppercorn rent. This was on the approaches to the old Downpatrick station, which had been demolished in the 1970s. Work started on rebuilding the railway in 1985, with public trains finally running in the town again in Friday 4 December 1987, making it the first Irish gauge heritage railway in Ireland to carry passengers over its own track. Track has been relaid on nearly 6 km (4 mi) of Belfast and County Down Railway trackbed, and a 1.6 km (1 mi) extension south to the hamlet of Ballydugan is planned. 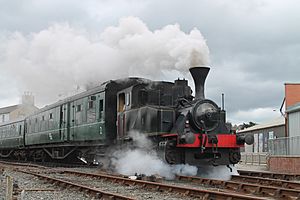 O&K No. 1 at Downpatrick 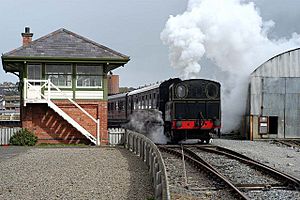 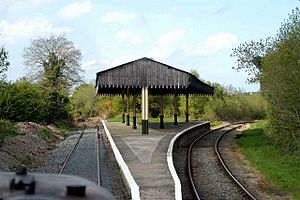 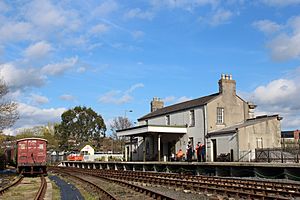 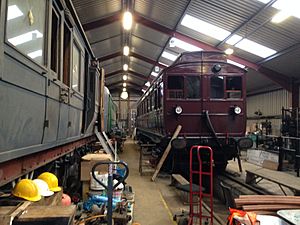 The BCDR Railmotor undergoing restoration in 2014.

Approximately 5 km (3 mi) of 1,600 mm (5 ft 3 in) Irish standard gauge track are open as of 2019[update], along which a steam locomotive, currently either O&K No. 1 or 3, and 1950s-60s era diesel locomotives are run, drawing preserved rolling stock. Passenger trains are usually operated with brake/generator standard class coach 3223, which was built in 1954 by Córas Iompair Éierann, brake/standard class coach 728, which was built in 1951 by the Ulster Transport Authority, and Park Royal brake/standard class coach 1944, also built in 1954 by Córas Iompair Éierann. Stock is added to or withdrawn from the 'running set' as maintenance allows. Older carriages built by the Great Southern and Western Railway and Belfast and County Down Railway were operated on the line, but as 1950s/1960s stock became available the DCDR moved these vintage carriages inside for overhaul and display. These vintage coaches are now used on a select few special running days, such as European Heritage Open Days and for private contracts, as they are too historically important for everyday wear and tear.

The railway also aims to have an at least partially operational mechanical signalling system, using the preserved King's Bog and Bundoran Junction signal cabins along with multiple semaphores that are on the site. Related to this is the Double Track Project, which will allow simultaneous operation on the North and South lines.

Every year, the DCDR operates the following trains:

Bank Holidays, shunts, private charters and film contracts make for extra trains throughout the year too.

On operating days, visitors have access to the BCDR Museum which is housed upstairs in Downpatrick railway station, the Downpatrick East signal cabin, a model railway room, the workshop viewing area (Where carriages can be seen undergoing restoration) and the Carriage Gallery.

A gift shop and buffet carriage, the latter of which will be parked at Inch Abbey or Downpatrick Loop Platform railway station, are open on operating days.

In 2020, all public DCDR operations were cancelled as a result of the COVID-19 pandemic.

Completed in 2012, the Carriage Gallery is the DCDR's museum with rolling stock that is not being used to run public trains during their visit. Like the Ulster Folk and Transport Museum, the Carriage Gallery houses vehicles in an indoors environment where the public can get up close and learn about both the vehicles in question, and Irish railways in general. Despite its name, the Carriage Gallery also contains locomotives, both steam and diesel, and even a road-going tar boiler. Designed in homage to the Victorian railway termini with their grand overall roofs, the Gallery collection is arranged across 3 roads with 4 platform faces, allowing visitors the chance to enter the vehicles. The condition of the exhibits ranges from fully restored to as-discovered so that visitors can appreciate the huge work required, with some carriages still in the hen-house state they were found in on farms across the country.

The Carriage Gallery was officially opened by the Earl Of Wessex in 2014.

At present O&Ks Nos. 1 and 3 are the operational steam locomotives. 1875-built 0-6-0 tank engine, GSWR No.90, delivered to Downpatrick on Sunday 30 September 2007, is Ireland's oldest steam engine capable of operation. Two E Class diesels, Nos. E421 and E432, were acquired in 1986, with E421 working the Society's first passenger trains. However, the E Class could not start from cold and thus three G Class diesels arrived at the railway to facilitate shunting and works trains - one was purchased privately by a volunteer from Westrail, and two are on long-term loan from the Irish Traction Group (ITG). The ITG also loans three mainline diesels to the railway - CIÉ A class No.A39R (arrived 22 November 2009), 141 class No. 146 (arrived 27 November 2010) and 201 Class No. C231. (arrived 7 June 2014).

Sligo, Leitrim and Northern Counties Railway Railcar B, built in 1947, was donated to the railway by Iarnród Éireann in 2006. This railcar arrived in poor condition and it will be some time before the DCDR can return it to operational condition. Prototype BR-Leyland railbus, RB3, which was modified in the early 1980s to run on Irish metals and was used for a period by Northern Ireland Railways, was acquired by DCDR in 2001, with the hope of using it to run midweek trains as it did not require as large a crew as locomotive-hauled trains. However, due to several faults inherent with the prototype Railbus' design, this did not come to fruition. Three more ex-NIR railcars are owned by DCDR, comprising the last 450 Class, 458 ''Antrim Castle'', which arrived in 2014 and has been converted to a buffet train, and two 80 class railcars which arrived in 2018.

There are four main 'carriage rakes'. These are:

The everyday running set currently consists of CIÉ 1944 and UTA 728, with generator van CIÉ 3223 being added for Autumn/Winter operations to provide heat and light. On special days, the Vintage Set is used, consisting of BCDR Nos. 72 and 148, and GSWR 836. 836 is also sometimes added to the everyday running set on very busy days, creating a high-capacity rake along with 1944 and 728 capable of seating over 200 people. The buffet set is publicly accessible on running days when it is parked in a platform (the New Buffet at Inch Abbey during Spring and Summer, and the Old Buffet at the Loop Platform in Autumn and Winter).

The remainder of the carriage fleet is considerably varied, with a mix of six- and four-wheeled and bogie carriages, and representatives from virtually every time period and Irish gauge railway company - including the BCDR (The DCDR owns 5 of the 6 extant BCDR carriages), GNR, GSWR, GSR, UTA, NIR, CIÉ, and most significantly, the Ulster Railway, which is represented by No. 33, the sole surviving UR vehicle and Ulster's oldest carriage. Other notable carriages are BCDR Railmotor No. 72 and Royal Saloon No. 153, both of Ireland's extant Travelling Post Offices and the last AEC railcar. Two carriages, GSWR No.'s 1097 and 1287, arrived at the railway in the mid-2000s on loan from RPSI, though ownership was later transferred to DCDR.

The DCDR also has a large selection of wagons, goods vans and underframes. Ex-NCC brake van No. 33 was the railway's first passenger-carrying vehicle. Included in the railway's wagon fleet is the most powerful steam crane in Ireland, NCC No. 3084. As the wagons do not contribute to bringing in revenue like engines and carriages, most are in storage except for a small few in use by the railway's Permanent Way or Locomotive Departments. In time, DCDR hopes to construct a dedicated goods shed in order to finally give its wagons a permanent home.

A small fleet of permanent way vehicles, all acquired from NIR, and some road/rail on-track plant are used by the railway's Permanent Way department.

All content from Kiddle encyclopedia articles (including the article images and facts) can be freely used under Attribution-ShareAlike license, unless stated otherwise. Cite this article:
Downpatrick and County Down Railway Facts for Kids. Kiddle Encyclopedia.