Down Cathedral facts for kids 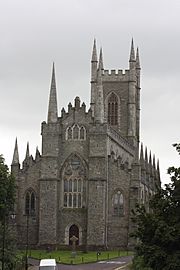 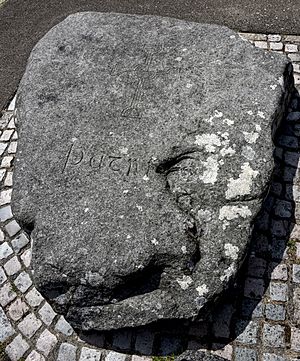 Down Cathedral, the Cathedral Church of the Holy and Undivided Trinity, is a Church of Ireland cathedral located in the town of Downpatrick in Northern Ireland. It stands on Cathedral Hill overlooking the town. It is one of two cathedrals in the Diocese of Down and Dromore (the other is Dromore Cathedral) in the County of Ulster. The cathedral is centre point in Downpatrick.

It is an ancient ecclesiastical site with a church dedicated to the Holy Trinity, first recorded in the 12th century. In 1124 St Malachy became Bishop of Down, and set about repairing and enlarging the cathedral. In 1177, Sir John de Courcy (Norman conqueror of Ulster) brought in Benedictine monks and expelled the older monastic community. De Courcy, who had enraged the king by his seizure of lands in Ireland beyond what he was granted, was taken prisoner there on Good Friday 1204. According to the account, the unarmed de Courcy managed to take a weapon from one of his attackers and killed 13 men before being overpowered and taken prisoner.

By 1220, this building was in ruins and was further damaged by an earthquake in 1245. The cathedral was burned down by Edward Bruce in 1315 and subsequently rebuilt and destroyed several times. In 1538 the monastery was suppressed and then destroyed in 1539 by Lord Leonard Grey, the Lord Deputy of Ireland, who stabled horses there. The destruction of the cathedral was one of the charges for which Grey was executed in 1541. For two centuries after that it lay in ruins. In 1778 John Wesley, the founder of Methodism, visited and described it as a noble ruin. A round tower close to the cathedral was taken down in 1790.

The cathedral incorporates parts of the 13th-century church of the Benedictine Abbey of Down (Black Monks).

The restoration of the ruined 14th-century cathedral of Downpatrick was initiated after an Act of Parliament of 1790 granted £1000 (approximately £142,000 in today's currency) for the purpose. The Earl of Hillsborough donated a further £568 and £300 a year of the deanery tithes were appropriated. The long chancel from the late medieval cathedral was repaired and transformed into an aisled nave and chancel for the new cathedral. Charles Lilly directed the restoration, but it was so drastic that many details of the original building disappeared, as he aimed at reproducing an overall medieval effect. Work was completed and the cathedral was ready for use in 1818. An octagonal vestibule and a Perpendicular Gothic tower were added to the west end in 1826.

Crosses from the 9th, 10th and 12th centuries are preserved in the cathedral. The building today is mainly the original chancel from the 15th century with a vestibule and tower added. It had a second major restoration from 1985 to 1987, during which time the cathedral was closed. 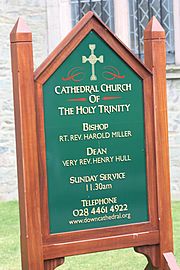 It houses an 11th-century granite font discovered in use as a watering trough in 1927 and installed in the cathedral in 1931. In the cathedral grounds is the burial place of St Patrick, believed to have died in 461. However, the inscribed stone of Mourne granite allegedly marking the grave was actually put in place in 1900. Outside the east end of the cathedral stands the replica of a weathered High-Cross made of granite. The 10th- or 11th-century original, which formerly stood in the centre of Downpatrick and was moved to the cathedral in 1897, has been on display in Down County Museum since 2015.

Two small stone crosses now built into a wall in Down Cathedral appear to be 12th-century work and are carved with monks holding books.

All content from Kiddle encyclopedia articles (including the article images and facts) can be freely used under Attribution-ShareAlike license, unless stated otherwise. Cite this article:
Down Cathedral Facts for Kids. Kiddle Encyclopedia.