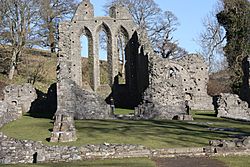 Inch Abbey (Irish: Mainistir na hInse; Ulster-Scots: Änch Abbey) is a large, ruined monastic site 0.75 miles (1.2 km) north-west of Downpatrick, County Down, Northern Ireland, on the north bank of the River Quoile in a hollow between two drumlins and featuring early Gothic architecture. The site is mostly in State Care and is at grid ref: J477455, off the main road to Belfast.

The site was originally on an island (Irish: Inis) in the Quoile Marshes. The pre-Norman Celtic monastic settlement here, known as Inis Cumhscraigh (or Inis Cuscraidh), was in existence by the year 800. In 1002 it was plundered by the Vikings led by Sitric, King of the Danes, who came up the Quoile with a fleet from the sea. The Vikings plundered the settlement again in 1149. Its large earthwork enclosure has been traced from aerial photographs. On the ground, the early bank and ditch can be followed along the line of trees on the eastern boundary of the site, and partly along the western boundary. The buildings of the early monastery would have been made of timber.

Inch Abbey was established as a Cistercian house by John de Courcy and his wife Affreca. Inch, or Iniscourcy, was erected as an act of repentance for the destruction of the Abbey at Erinagh (or Erenagh) (3 miles (4.8 km) to the south) by de Courcy in 1177. It was colonised directly by monks from Furness Abbey in Lancashire in 1180, along with some of the monks from Erinagh. The Cistercian monastery was located near to the river in the southern area of the Early Christian earthwork enclosure.

The Cistercian precinct was enclosed by a bank and ditch extending north and south from the parish graveyard to the river and east to west up the valley sides. The buildings are mainly of the late 12th century and the 13th century. The church (length 170 ft) was built about 1200, in the Cistercian cruciform plan with a low tower at the crossing, an aisled nave to the west and two projecting transepts (each 27 ft (8.2 m) square) each with a pair of chapels. Only the impressive east window remains. The chancel wall has three, well-proportioned, pointed windows, the middle one being 23 ft (7.0 m) high. The chancel was 42 ft (13 m) by 27 ft. There was an altar in each of the rib-vaulted transept chapels and in the north transept is a door out to the monk's cemetery (no longer visible) and a tower with broken stairs in the north-west angle. On the stone plinth of the north transept's exterior north wall a number of incised symbols can be seen which are mason's marks. The high altar was under the east windows and in the south wall are the remains of a triple sedilia (seats for the priests) and a piscina for washing the altar vessels. 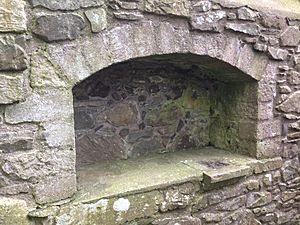 Piscina in the South wall of the chancel at Inch Abbey, Downpatrick

The community of monks was probably never very large (suggested by the small chapter house), and this may have led to the decision to reduce the size of the church by walling off a smaller area to the east end. Some continuity was maintained with the 13th century work by reusing a fine door of that period as the west door of the reduced church. In the 15th century, when the monastic community was smaller, the church was altered. Through the walling in of the chancel and first bay of the nave, and blocking off the transepts, a much smaller church was created and the rest was abandoned. The cloister walks to the south have disappeared, but foundations of the east and south ranges remain, as well as outlying buildings toward the river. These include an infirmary and a bakehouse with two ovens and a well nearby.

Much of the detail in the chancel is made up with cement over decayed sandstone, the result of restoration carried out in the 19th century. 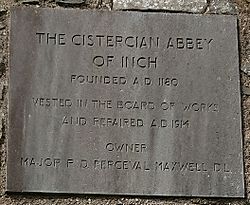 Judged by medieval standards the abbey was wealthy. In 1291 its temporalities were valued for taxation at £10 19s 4d. In 1380 Parliament tried to help waning English influence by restricting the membership of the Order at Inch to English or Anglicised Irish. Twenty-four years later, the abbey was burned and that, perhaps together with the collapse of a central tower and a dwindling community, gave the impetus to alter the size of the church. Monastic life continued, most likely on a small scale, until the 16th century, but the Abbey had been dissolved by 1541, when the abbey with about 850 acres (3.4 km2) of land was granted to Gerald, Earl of Kildare, along with other monasteries.

Sherds of medieval pottery were found in a field north of the Abbey graveyard. In 1983 conservation/preservation excavations were carried out on the Abbey nave by the Department of the Environment for Northern Ireland. One Romanesque carved stone of 12th century date was found at the site and could suggest that there had been a previous stone church on the site which could have been re-used.

Inch Abbey has its own railway station, which opened in 2005. Located 200m from the Abbey itself, Inch Abbey station is the terminus of the Downpatrick and County Down Railway's North Line. The station is open on St. Patrick's Day, Easter, bank holidays and Summer weekends for heritage steam or diesel services to Downpatrick town.

All content from Kiddle encyclopedia articles (including the article images and facts) can be freely used under Attribution-ShareAlike license, unless stated otherwise. Cite this article:
Inch Abbey Facts for Kids. Kiddle Encyclopedia.