Kids Encyclopedia Facts
This page is about the village in Northern Ireland. For places with similar names, see Crawford. 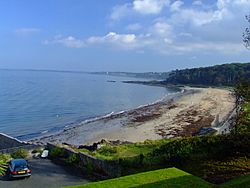 Crawfordsburn (from the sco: Crawford's burn meaning "Crawford's stream") is a small village in County Down, Northern Ireland. The village, which is now effectively a commuter suburb, lies between Holywood and Bangor to the north of the A2 road, about 4 km west of Bangor town centre. Bounded to the north and north east by Crawfordsburn Country Park, the village attracts many visitors. It had a population of 587 people in the 2011 Census.

Before the Plantation of Ulster, the area of Crawfordsburn was known as Ballymullan (Irish: Baile Uí Mhaoláin). Crawfordsburn originated in the 17th century as a small settlement on an important routeway along North Down. It was named after a stream which flows through the village. It has retained elements of its 17th-century history along its Main Street including the coaching inn. The Sharman-Crawford family developed the village in the 18th and 19th centuries. Crawfordsburn was promoted as a Victorian tourist attraction, particularly for those visitors using the railway to nearby Helens Bay.

At present it is used by the owners Crawfordsburn Chosen Few LOL 1091 who originally met in the old school house from 1905 and then bought their current building which is still in use to this day and continues to flourish with increased memberships. The hall is also used by Robert Whiteside Memorial LOL 1229 and Sir Henry Wilson RBP 1104. Also used by different community groups.

Bryansburn Rangers F.C. are an intermediate football club from the nearby town of Bangor, however their home ground Ballywooley is located on the Crawfordsburn Road on the way into the village.

Crawfordsburn is classified by the NI Statistics and Research Agency (NISRA) as being within Belfast Metropolitan Urban Area (BMUA). On Census day (27 March 2011) there were 587 people living in Crawfordsburn. Of these:

All content from Kiddle encyclopedia articles (including the article images and facts) can be freely used under Attribution-ShareAlike license, unless stated otherwise. Cite this article:
Crawfordsburn Facts for Kids. Kiddle Encyclopedia.