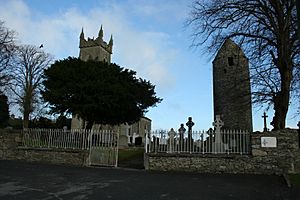 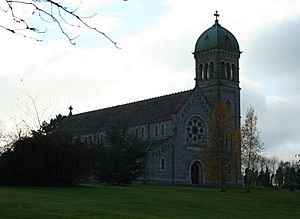 Dromiskin (historically Druminisklin, from Irish: Droim Ineasclainn) is a village and townland in County Louth, Ireland. It is situated 10 km south of Dundalk, about 1 km inland from the Irish Sea coast.

The village was home to a monastery for hundreds of years, which was reputedly associated with Saint Patrick. The first bishop of Dromiskin was Lughaidh, son of Aengus mac Nadfraoch the first Christian king of Munster. St. Patrick reputedly pierced Aengus's foot with his pastoral staff during the baptism.

The next few hundred years would be turbulent times for Dromiskin. The constant plundering by both Viking and Irish would destroy the Abbey and disperse the monks. Annudh macRuaire rampaged through the territory in 1043 and Dromiskin was destroyed. The ecclesiastical site was abandoned and the monks took refuge in the neighbouring Abbey of Saint Mochta, the possessions of this ancient church being placed in the hands of the Prior of Louth Abbey.

The old ninth century round tower and parts of the Abbey still remain. From the tower there is a view of all of Dundalk Bay and the surrounding countryside.

The village is part of the Darver and Dromiskin parish, Darver being a neighbouring village. The parish is bounded by the Fane River on the north and by the Glyde River on the south.

The local Gaelic football club, St. Joseph's, was formed in 1961. It covers the entire parish of Darver & Dromiskin, and won the Senior county championship (Joe Ward Cup) in 1996 and 2006. As of 2011, the club were playing Intermediate level championship as well as Division 2 league football, having been relegated from League Division 1 in 2010. The club's Minor (U-18) team won the county championship for the first time in 2009 and retained the championship in 2010. There is also an athletics club, St Peter's Athletic Club, based on the outskirts of the village.

All content from Kiddle encyclopedia articles (including the article images and facts) can be freely used under Attribution-ShareAlike license, unless stated otherwise. Cite this article:
Dromiskin Facts for Kids. Kiddle Encyclopedia.