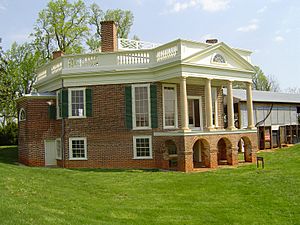 The Poplar Forest is the retreat home of Thomas Jefferson, third president of the United States of America near Lynchburg, Virginia.

His wife inherited the 4,819 acre plantation and he built an octagonal retreat home there which was basically complete in the year 1812. The home contains a central dining room in the shape of a cube, measuring 20 feet on all sides and lit from a skylight above. Currently under restoration, the building gives a fascinating glimpse of how things were built in those days, as well as showing off a few of Jefferson's inventions such as the triple sash window. Jefferson used the property as a respite (rest) from the busy Monticello, which was always welcoming visitors, and spent most of his time there only with close family members. He had a library containing 700 volumes and he used his time there to communicate with his 'absent friends', in other words, to catch up on his written correspondence.

All content from Kiddle encyclopedia articles (including the article images and facts) can be freely used under Attribution-ShareAlike license, unless stated otherwise. Cite this article:
Poplar Forest Facts for Kids. Kiddle Encyclopedia.