Desert of Wales facts for kids 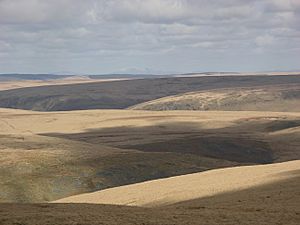 The Desert of Wales seen from Drygarn Fawr

The Desert of Wales, or Green Desert of Wales, is a large area in central Wales, so called because of its lack of roads and towns and its inaccessibility. The term was invented by English travel writers in the nineteenth century and has no equivalent in the Welsh language. The area corresponds roughly to the upland area called Elenydd in Welsh and also referred to locally as the Cambrian Mountains.

In this case the word "desert" is used in the sense of an area uninhabited by humans (as in "desert island"), not in the sense of an arid desert. The area has high rainfall and much of it is covered by peat overlain with purple moor grass and heather moorland, or by plantations of non-native conifers. The soil tends to be acidic. There is no exact definition of the extent of the Desert of Wales, but it is bordered to the east by the A470 and the town of Rhayader, to the south by the A483 from Builth Wells to Llanwrda, to the west by the A482 from Llanwrda to Pumpsaint, and from there northwards by a series of country roads up to Tregaron. The northern boundary is generally taken to be the A44 between Ponterwyd and Llangurig, although the substantial area of moorland to the north of this road, including the reservoirs of Nant y Moch and Llyn Clywedog, has similar topography.

The term Desert of Wales has been used to describe the area since before 1860 when the following was written by John Henry Cliffe:

The locality we were now traversing is one of the most untamed and desolate in either division of the Principality; it has indeed with perfect truth been called the "great desert of Wales." Vast sweeping ranges of hills with round tops, add to the dreary aspect of this nearly unpeopled region...

The ruins of Strata Florida Abbey are located on the road from Tregaron. 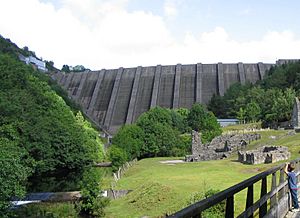 The area supported the last native red kites in the United Kingdom until their reintroduction and widespread revival in the 1980s.

All content from Kiddle encyclopedia articles (including the article images and facts) can be freely used under Attribution-ShareAlike license, unless stated otherwise. Cite this article:
Desert of Wales Facts for Kids. Kiddle Encyclopedia.