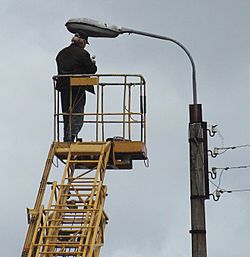 An electrician working on a light.

An electrician is a tradesperson specializing in electrical wiring of buildings, stationary machines, and related equipment. Electricians may be employed in the installation of new electrical components or the maintenance and repair of existing electrical infrastructure. Electricians may also specialize in wiring ships, airplanes, and other mobile platforms, as well as data and cable.

Electricians were originally people who demonstrated or studied the principles of electricity, often electrostatic generators of one form or another.

In the United States, electricians are divided into two primary categories: linemen, who work on electric utility company distribution systems at higher voltages, and wiremen, who work with the lower voltages utilized inside buildings. Wiremen are generally trained in one of five primary specialties: commercial, residential, light industrial, industrial, and low-voltage wiring, more commonly known as Voice-Data-Video, or VDV. Other sub-specialties such as control wiring and fire-alarm may be performed by specialists trained in the devices being installed, or by inside wiremen.

Electricians are trained to one of three levels: Apprentice, Journeyman, and Master Electrician. In the US and Canada, apprentices work and receive a reduced compensation while learning their trade. They generally take several hundred hours of classroom instruction and are contracted to follow apprenticeship standards for a period of between three and six years, during which time they are paid as a percentage of the Journeyman's pay. Journeymen are electricians who have completed their Apprenticeship and who have been found by the local, State, or National licensing body to be competent in the electrical trade. Master Electricians have performed well in the trade for a period of time, often seven to ten years, and have passed an exam to demonstrate superior knowledge of the National Electrical Code, or NEC.

In the film industry and on a television crew the head electrician is referred to as a Gaffer.

Electrical contractors are businesses that employ electricians to design, install, and maintain electrical systems. Contractors are responsible for generating bids for new jobs, hiring tradespeople for the job, providing material to electricians in a timely manner, and communicating with architects, electrical and building engineers, and the customer to plan and complete the finished product.

All content from Kiddle encyclopedia articles (including the article images and facts) can be freely used under Attribution-ShareAlike license, unless stated otherwise. Cite this article:
Electrician Facts for Kids. Kiddle Encyclopedia.