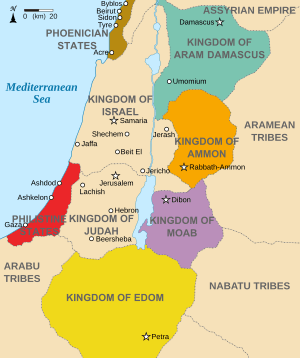 The region around 830 BC. Ammon is shown in orange

Ammon is an ancient country in the Middle East. It was situated in northwestern Jordan and lay east of the Kingdom of Israel.

It is mentioned in the Bible and there often called the Kingdom of Ammon.

According to the Biblical Book of Genesis Ammon is a grandson of Lot, the nephew of Abraham (the other grandson is Moab; the Kingdom of Moab lay south of Ammon).

The Ammonites often fought with the Israelites.

All content from Kiddle encyclopedia articles (including the article images and facts) can be freely used under Attribution-ShareAlike license, unless stated otherwise. Cite this article:
Ammon Facts for Kids. Kiddle Encyclopedia.