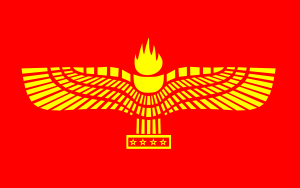 Arameans, also known as Syriacs are a predominantly Syriac Christian ethnic group whose origins remain in what is today Iraq, Turkey and Syria and fled to Western Europe, North America and the Caucasus due persecution over the past centuries. The Arameans speak Aramaic which once was the language of the whole Middle East.

Their culture has survived for thousands of years despite efforts by their Arab, Turkish and Kurdish neighbors to demolish it: it remains a strong influence on their way of life. Today there are about 3-5 million Arameans worldwide with the majority living in the diaspora.

All content from Kiddle encyclopedia articles (including the article images and facts) can be freely used under Attribution-ShareAlike license, unless stated otherwise. Cite this article:
Arameans Facts for Kids. Kiddle Encyclopedia.