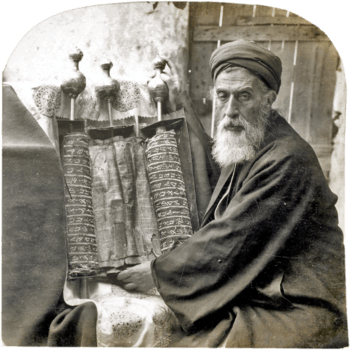 The Samaritan Pentateuch or Samaritan Torah is a special version of the Torah used by the Samaritans. This version was created at the latest 127 BC, when the Temple in Jerusalem was destroyed, and the Samaritans split from the other group in the Temple. As the name says, this version contains the first five books of Moses, or the Torah.

Samaritan practices are based on their version of the Five Books of Moses, which is slightly different from the Masoretic text or the Greek Septuagint texts. Some differences are small, such as the ages of different people mentioned in genealogy, while others are major, such as the commandment to only have one wife which appears in the Samaritan text but not in the other versions. (See Lev 18:18.)

Special importance is attached to the Abisha Scroll, which is used in the Samaritan synagogue of Nablus. The Samaritans claim it was penned by Abishua, great-grandson of Aaron (1 Chronicles 6:35), thirteen years after the entry into the land of Israel under the leadership of Joshua, son of Nun. But modern scholars have observed that the scroll appears to include work by different scribes from different centuries, with the oldest texts dating to the 12th century A.D.

All content from Kiddle encyclopedia articles (including the article images and facts) can be freely used under Attribution-ShareAlike license, unless stated otherwise. Cite this article:
Samaritan Pentateuch Facts for Kids. Kiddle Encyclopedia.