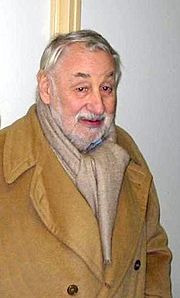 Philippe Noiret (1 October 1930, in Lille, France – 23 November 2006 in Paris) was a well-known French actor. He is probably best known for his role in Cinema Paradiso, and for playing Pablo Neruda in the film Il Postino. He died on November 23, 2006 of cancer.

All content from Kiddle encyclopedia articles (including the article images and facts) can be freely used under Attribution-ShareAlike license, unless stated otherwise. Cite this article:
Philippe Noiret Facts for Kids. Kiddle Encyclopedia.