Giuseppe Tornatore (born 27 May 1956) is an Italian film director and screenwriter. He is considered as one of the directors who brought critical acclaim back to Italian cinema. In a career spanning over 30 years he is best known for directing and writing drama films such as Everybody's Fine, The Legend of 1900, Malèna, Baarìa and The Best Offer. Probably his most noted film is Nuovo Cinema Paradiso, for which Tornatore won the Academy Award for Best Foreign Language Film. He has also directed several advertising campaigns for Dolce & Gabbana.

Tornatore is also known for his long-standing association with composer Ennio Morricone, who composed music for thirteen Tornatore feature films since 1988.

Born in Bagheria near Palermo, Tornatore developed an interest in acting and the theatre from at least the age of 16 and put on works by Luigi Pirandello and Eduardo De Filippo.

He worked initially as a freelance photographer. Then, switching to cinema, he made his debut with Le minoranze etniche in Sicilia (The Ethnic Minorities in Sicily), a collaborative documentary film which won a Salerno Festival prize. He then worked for RAI before releasing his first full-length film, Il Camorrista, in 1985. This evoked a positive response from audience and critics alike and Tornatore was awarded the Silver Ribbon for best new director.

Tornatore's best known screen work was released in 1988: Nuovo Cinema Paradiso, a film narrating the life of a successful film director who has returned to his native town in Sicily for the funeral of his mentor. This obtained worldwide success and won an Academy Award for Best Foreign Language Film. Subsequently, Tornatore released several other films. In 2007 he won the Silver George for Best Director at the 29th Moscow International Film Festival for The Unknown Woman.

Tornatore describes himself as "one who does not believe and who regrets this". His brother, Francesco Tornatore, is a producer. 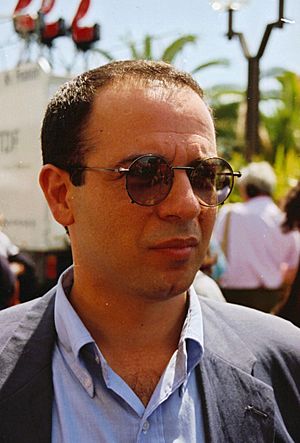 Tornatore at the 1994 Cannes Film Festival.

All content from Kiddle encyclopedia articles (including the article images and facts) can be freely used under Attribution-ShareAlike license, unless stated otherwise. Cite this article:
Giuseppe Tornatore Facts for Kids. Kiddle Encyclopedia.