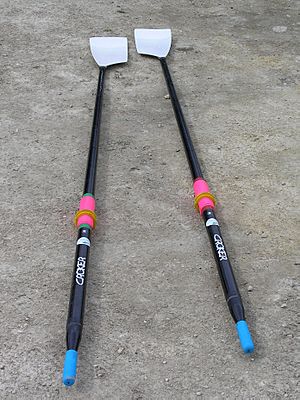 An oar is a tool used to move a boat through water. Oars have a flat blade at one end. The oarsmen grasp the oar at the other end. The difference between oars and paddles is that paddles are held by the paddler, and are not connected with the vessel. Oars generally are fastened to the vessel. The use of oars is called rowing. An oar used at the stern (rear) of a boat to steer is called a steering oar.

All content from Kiddle encyclopedia articles (including the article images and facts) can be freely used under Attribution-ShareAlike license, unless stated otherwise. Cite this article:
Oar Facts for Kids. Kiddle Encyclopedia.