Flag of Estonia facts for kids 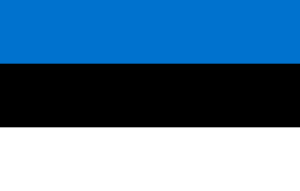 Flag of the President of Estonia

The flag of Estonia has three colours and is made of three equal horizontal bands coloured blue (top), black, and white (bottom). Blue mirrors the sky, black the colour of the soil and national coat, and white the peoples' happiness and light. In Estonian language it is called the "sinimustvalge" (literally "blue-black-white"), after the colours of the bands. The flag was designed in the 1880s and adopted when Estonia became independent in 1918.

All content from Kiddle encyclopedia articles (including the article images and facts) can be freely used under Attribution-ShareAlike license, unless stated otherwise. Cite this article:
Flag of Estonia Facts for Kids. Kiddle Encyclopedia.