Kamil Paweł Grosicki ( born 8 June 1988) is a Polish professional footballer who most recently played as a winger for Premier League club West Bromwich Albion and the Poland national team.

A full international for Poland with over eighty caps since 2008, he represented the country at UEFA Euro 2012 and Euro 2016, as well as the 2018 FIFA World Cup.

Grosicki began his career at Pogoń Szczecin. In 2007, he joined Legia Warsaw, although after a few months, he requested a loan move due to personal problems. On 13 February 2008, it was announced that he would go on loan to Swiss side Sion until 31 December 2008. He played in eight matches and scored two goals during the second half of the 2007–08 Ekstraklasa. At the start of the following season, he was dropped to the under-21 team by the club's new manager. He left the club a few months later.

In February 2009, Jagiellonia Białystok took Grosicki on loan until the end of the 2008–09 season, with the club also securing the right to buy him for 500,000 złoty. Grosicki signed a three-year contract with Jagiellonia which began in June 2009.

Grosicki's second stint abroad was with Süper Lig side Sivasspor, where he was transferred to in January 2011 for approximately €900,000 on a three-and-a-half-year contract. 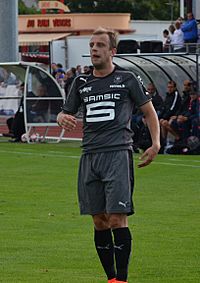 Grosicki playing for Rennes in 2014

On 24 January 2014, Grosicki transferred to French side Rennes in Ligue 1. He scored the first goal of their surprise 2–0 win over Lille on 27 March, which put Rennes into the semi-finals of the Coupe de France. In the semi-final on 15 April, he scored again in a 3–2 win over Angers. Grosicki played 52 minutes of the final before being substituted for Paul-Georges Ntep as Rennes went on to lose 2–0 to Guingamp. During his time with Rennes, Grosicki made 85 appearances and scored 13 goals.

On 31 January 2017, Grosicki signed a three-and-a-half year contract with Premier League club Hull City. He made his debut in Hull City's 2–0 victory over Liverpool on 4 February 2017. Grosicki won PFA Fans' Premier League Player of the Month for April. Grosicki scored his first goal for the club on 12 August 2017, when he netted the second goal in a 4–1 home win against Burton Albion.

On 31 January 2020, Grosicki signed an 18-month contract with West Bromwich Albion for an undisclosed fee. The fee was believed to be in the region of £1m, with add-ons based on promotion to the Premier League. He scored his first goal for the club in a 4–2 home win against his former club, Hull City on 5 July 2020.

On 27 May 2021 it was announced that Grosicki would leave West Bromwich Albion following the conclusion of his contract. 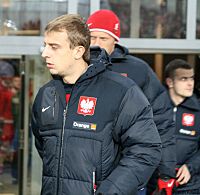 Grosicki appeared for the Poland under-21 side. On 2 February 2008, he made his senior debut for Poland in a friendly against Finland.

Grosicki was selected in the country's squad as it co-hosted UEFA Euro 2012. His sole appearance in the tournament came on 16 June in the second group match in Wrocław, replacing Eugen Polanski for the final 34 minutes of a 1–0 defeat to the Czech Republic.

On his 24th cap on 7 September 2014, Grosicki scored his first two goals for Poland in a 7–0 win away to Gibraltar at the start of UEFA Euro 2016 qualification.

Representing Poland at Euro 2016, he was a key player for his national team, providing two assists in the competition for Jakub Błaszczykowski's goal against Switzerland in the round of 16 and Robert Lewandowski's goal against Portugal in the quarter-finals.

Kamil has two sisters; Kornelia, who is also a professional footballer, and Oliwia. He is married to Dominika.

All content from Kiddle encyclopedia articles (including the article images and facts) can be freely used under Attribution-ShareAlike license, unless stated otherwise. Cite this article:
Kamil Grosicki Facts for Kids. Kiddle Encyclopedia.