This is a Portuguese name; the first family name is Borges and the second is Fernandes.

Bruno Miguel Borges Fernandes (born 8 September 1994 in Maia, Porto) is a Portuguese professional footballer. He plays as a midfielder for Premier League club Manchester United and for the Portugal national team.

He has previously played in Italy for Novara, Udinese, and Sampdoria, as well as in Portugal with Sporting CP. He was named Primeira Liga Player of the Year in both 2018 and 2019. In January 2020, Manchester United signed him for an initial fee of €55 million (£47 million).

Fernandes was born in Maia, Metropolitan Area of Porto. He played most of his youth football with local club Boavista FC. On 27 August 2012, he went to play for Novara Calcio in Italy.

After only a few weeks with the youth side, Fernandes started to play to the first team in Serie B. He played in just over half of the league games during the 2012–13 season. He helped his team to fifth place and the promotion play-offs.

In summer 2013, Fernandes signed for Udinese Calcio in a co-ownership deal. He made his debut in Serie A on 3 November. He came on as a second-half substitute. Udinese lost 0–3 at home against Inter Milan.

Fernandes scored his first league goal on 7 December 2013. This was in a 3–3 draw at S.S.C. Napoli. He scored again in the second match between the sides (a 1–1 draw).

On 16 August 2016, Fernandes moved to U.C. Sampdoria on loan. He also had to sign permanently. He made his league debut twelve days later. He played six minutes in a 2–1 home win against Atalanta BC.

Fernandes scored his first goal for his new team on 26 September 2016. This was in a 1–2 away loss to Cagliari Calcio. He scored 5 goals in 33 Serie A appearances during the campaign. He helped Udinese finish in thirteenth position.

On 27 June 2017, after the UEFA European Under-21 Championship, Fernandes joined Sporting CP for five years. This was for a reported fee of €8.5 million plus bonuses. He had a buyout clause of €100 million. He scored four goals in his first five Primeira Liga games. This included two goals in a 5–0 away win against Vitória de Guimarães.

Fernandes' first appearance in the UEFA Champions League group stage was on 12 September 2017. He scored the team's third goal in the 43rd minute. The time won 3–2 win against Olympiacos FC. He finished his first season with 16 goals across all competitions. This was second only to Bas Dost.

On 15 May 2018, Fernandes and several of his teammates and coaches were injured following an attack by around 50 Sporting supporters at the club's training ground. This was after the team finished third in the league and did not get to the Champions League qualification stage. Despite this, the team still played in the final of the Taça de Portugal the weekend after. Sporting lost against C.D. Aves.

Fernandes was named the Primeira Liga Player of the Year on 6 July 2018. Four days later he signed a new five-year contract with a €100 million release clause.

Fernandes scored his 23rd competitive goal of the 2018–19 campaign. This was during a 3–1 home win against Portimonense S.C. on 3 March 2019, through a late penalty. He beat António Oliveira's club record for goals by a midfielder in a season. This was set in 1981–82. On 5 May, he scored a hat-trick in an 8–1 away win against Belenenses SAD. He became the highest-scoring Portuguese midfielder in a single season ever, with 31 goals to his name. He scored his 33rd and final goal of the season on 25 May 2019. This was during Sporting's win against FC Porto in the Taça de Portugal final. He was named Primeira Liga Player of the Year for the second year, in the 2018–19 season.

He scored seven goals in his first 10 appearances of the 2019–20 season. This included scoring in six matches in a row. This made him the third Sporting player in the 21st century to score in six or more matches in a row, after Mário Jardel and Bas Dost. On 28 November 2019, he scored twice and assisted the other two goals in a 4–0 win against PSV Eindhoven. This made sure Sporting qualified for the knockout stages of the UEFA Europa League.

On 29 January 2020, English club Manchester United agreed with Sporting to buy Fernandes. This was for a fee of up to €80 million (£67.6 million). Fernandes also needed to pass a medical and agree personal terms. The transfer was officially done the day after. The initial fee is around €55 million (£47 million), and up to €25 million (£21 million) in add-ons. Sporting will also get 10% of the profits if United ever sell Fernandes. Fernandes signed a five-and-a-half-year contract. 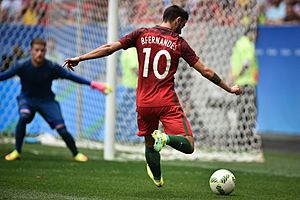 Fernandes playing for Portugal at the 2016 Summer Olympics

Fernandes has played for Portugal at five levels. Before he played in the senior team (the main Portugal team), he was captain of the under-21 team.

Fernandes played for Portugal in the 2016 Summer Olympics. He started every game, as Portuagl reached the quarter-finals.

When he played in Italy, he did not play for Portugal. He was called up for the national team on 28 August 2017. He took the place of Pizzi because he was injured. This was for World Cup qualifiers against the Faroe Islands and Hungary.

Fernandes won his first full cap on 10 November 2017. He came on in place of Manuel Fernandes for the last 34 minutes of the 3–0 friendly win over Saudi Arabia. Fernando Santos chose him in his team for the 2018 FIFA World Cup in Russia. He scored his first national team goal on 7 June. This was a header in the last warm-up match before the tournament, a 3–0 win against Algeria at the Estádio da Luz.

Fernandes is an attacking midfielder. He is a direct, energetic playmaker. He can take on defenders and also set the rhythm of play. Because he is direct, Fernandes sometimes takes risks. He tries difficult passes to create chances of scoring goals.He often presses the opposition quickly after losing possession. In addition, he is a a good free-kick taker. He likes to shoot from outside the penalty area. His movement off the ball is also important, as he looks to find space to create chances. Fernandes can also play in a deeper central midfield role, or as a second striker.

All content from Kiddle encyclopedia articles (including the article images and facts) can be freely used under Attribution-ShareAlike license, unless stated otherwise. Cite this article:
Bruno Fernandes Facts for Kids. Kiddle Encyclopedia.