Regarded as one of the best midfielders in world football and one of Portugal's best players of all time, Costa usually played as an attacking midfielder and was particularly known for his excellent technique, playmaking ability, and eye for goal from midfield. In 2004, he was named by Pelé in the FIFA 100 as one of the 125 greatest living football players.

Nicknamed "The Maestro" and "Il Musagete", Costa spent the majority of his career with Benfica in Portugal and Fiorentina and AC Milan in Italy. In a top-flight career spanning 17 years, he won several trophies, including one Primeira Liga title, one Taça de Portugal, one Serie A title, three Coppa Italia, one UEFA Champions League and one UEFA Super Cup. A Portuguese international, he amassed 94 caps and scored 26 goals for A Seleção and represented the country in three UEFA European Championships and one FIFA World Cup.

At age five, Costa joined the infant indoor football team of Damaia Ginásio Clube. Costa tried his luck at Benfica. Within ten minutes of training, Portugal legend Eusébio, who was supervising the youngsters, was impressed with Costa's skills. Up until 1990, Costa played for Benfica's youth squads. In his first full season, he was loaned to A.D. Fafe on a season-long deal.

In 1991, after the Under-21 World Cup, which Portugal won after a penalty kick scored by Costa, he returned to Benfica. In his first full season with Benfica, he was featured regularly in Benfica's team. In his next two seasons, his role in the team would prove to be pivotal as Benfica captured two trophies. He formed a formidable midfield partnership with João Vieira Pinto. During his last two seasons with Benfica in his first spell with the club, he won the Taça de Portugal in 1993 and the Portuguese First Division title in 1993–94. This would be Benfica's last league title for 11 years.

At the end of his third season in Benfica's senior squad, Fiorentina offered for the young midfielder. Since Benfica were struggling with financial problems, Costa had to leave.

Despite the heavy competition with the best midfielders in that time such as Zinedine Zidane, Costa was named the best number 10 player in Serie A a few times. His departure from Fiorentina was discussed every season, since many clubs constantly showed interest in signing him. However, he only left Fiorentina one season before their bankruptcy in the 2001–02 season. With the Florentine club, Costa won the Coppa Italia twice, also winning a Supercoppa Italiana. In June 2001, Fiorentina agreed to sell both Costa and Francesco Toldo to Parma for 140 billion lire. Despite both players refusal to join, Costa and Toldo were sold to AC Milan and Inter Milan, respectively, for the same total transfer fee.

Fatih Terim was the coach of Fiorentina in the 2000–01 season. When he was leaving Fiorentina for AC Milan, he took Costa with him, paying 85 billion lire (€43,898,836) for the player. In so doing, Costa became Milan's most expensive transfer of all-time.

On 27 September 2001, Costa scored his first goal for Milan to open a 4–0 home win (6–0 aggregate) in the first round of the UEFA Cup against BATE Borisov. He added further goals in wins over CSKA Sofia (second round) and Hapoel Tel Aviv (quarter-finals) in a run to the last four.

Costa scored his first domestic goal on 18 December 2002, equalising in a 5–1 win (6–2 aggregate) against Ancona at the San Siro in the second leg of the last 16 of the Coppa Italia. In the 6–3 aggregate final win over Roma in May, he played only 30 minutes as a substitute as Brazilians Rivaldo and Serginho were preferred in attacking midfield. This was to rest him for the 2003 UEFA Champions League Final against Juventus, in which he was substituted injured for Massimo Ambrosini near the end of regulation time in a goalless draw that the Rossoneri won on penalties at Old Trafford. On 29 August, he played in the 1–0 victory over Porto in the 2003 UEFA Super Cup, in which he crossed for the only goal by Andriy Shevchenko.

From 2003–04, Costa's playing time was limited by the emergent Brazilian youngster Kaká. He contributed his first three league goals to Milan's title-winning campaign, starting with one in a 5–0 home win over Ancona on 25 January. 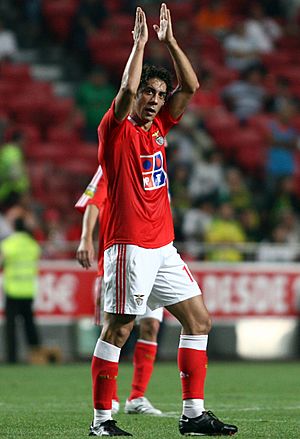 On 25 May 2006, Costa's return to Benfica to play in the upcoming season was announced in a press conference. He had been released from Milan after both the player and the club reached an agreement to end his contract. Costa gave up of his €4.6 million per year contract with Milan after he had dreamt of his return to Benfica year after year. His return saw former Benfica and Portugal international Eusébio praise Costa's return. Costa's first match back saw him start in a 2006–07 UEFA Champions League qualifier against Austria Wien in August 2006. The return leg saw Costa score in his return to the Estádio da Luz in the 21st minute. Benfica would go on to win 3–0 and clinch a place in the group stages of the Champions League.

Following the start of the season, Costa would suffer a serious injury which would keep him out of action for three months. Costa returned in January 2007, in a Taça de Portugal fourth round tie against Oliveira do Bairro Following his return, he was used as a regular in Benfica's starting XI under manager Fernando Santos. His first season would see Benfica finish behind rivals Porto and Sporting CP in the Primeira Liga. In other competitions Benfica participated in, the club would be eliminated in the round of 16 in the Taça de Portugal and bow out of the UEFA Cup against Espanyol.

Prior to start of the 2007–08 Primeira Liga, Costa would announce that the 2007–08 season would be his last as a professional. Despite the sacking of Fernando Santos at the beginning of the league campaign, Costa would remain a first team regular under José Antonio Camacho. The first match of the season saw Costa be decisive in Benfica reaching the Champions League group stage. He scored two goals in a qualifier against Copenhagen in the first leg. He would also play an important part in the second leg where Benfica defeated the Danish side 1–0 away from home to seal Benfica's third consecutive presence in the group stage.

Costa would score his first league goal since his return to Benfica against C.D. Nacional in September 2007. His displays in the league would earn him the SJPF Player of the Month award for September 2007. Following qualification to the group stage, Benfica was drawn against Costa's former club Milan. The inaugural match of the group stage in September 2007 saw Benfica take on the Rossoneri at the San Siro, where Milan won 2–1. The return fixture on matchday 5 would see Milan visit the Estádio da Luz, where the teams drew 1–1. Benfica would exit the competition in third place behind Milan and Celtic, thereby dropping into the knockout stages of the UEFA Cup.

In the new year, Benfica dropped various points along their campaign to Académica de Coimbra, Braga, Porto, Sporting CP and União de Leiria, which effectively dropped them out of the title race. Their failure to compete for the title resulted in Benfica setting their priorities to capture third place which secured a Champions League qualification. Benfica would fail to capture third place, which instead would go to newly promoted Vitória de Guimarães. Benfica would also drop out of the round of 16 of the UEFA Cup to Spanish side Getafe. Under Costa's captaincy, Benfica would also fall short in the 2007–08 Taça de Portugal, where they lost to Sporting in the semi-finals despite Costa scoring in a match which ended 5–3. Costa played his final match on 11 May 2008 at the Estádio da Luz against Vitória de Setúbal. He was substituted in the 86th minute to a standing ovation from the spectators.

In the summer of 1991, Costa's displays at Fafe had impressed Portugal Under-21 coach Carlos Queiroz so much that he was called up to the team to represent Portugal in the World Youth Cup. The Portuguese under-20 national team won a World Youth Championship in 1991. His clinching penalty kick against Brazil in the final helped win the title on home soil and announced Costa as one of the brightest members of what would become known as the “Golden Generation.”

Costa was a member of Portugal's most consistent years at senior level as the team reached the quarter-finals of UEFA Euro 1996, the semi-finals of Euro 2000 and the final of UEFA Euro 2004.

Costa was especially instrumental in helping Portugal reach the 2004 final on home soil, scoring a screamer of a goal at the Estádio da Luz against England in the quarter-final match, and the sight of a distraught Costa at the end of a 1–0 defeat to Greece was one of the enduring images of the tournament.

Costa also took part in the 2002 FIFA World Cup in Japan and South Korea, scoring Portugal's winning goal in their 4–0 win over Poland. The only time in his career that Costa was sent off was in an international game against Germany.

Despite being principally a provider, Costa scored 26 goals in 94 games; he is Portugal's eighth-highest appearance maker and seventh-highest goalscorer.

Considered one of the greatest midfielders of his generation, Costa was a classic number 10, who usually played in a creative role as an attacking midfielder behind the strikers, but was also capable of playing as a deep-lying playmaker, as a second striker, or as a winger. Despite his ability, however, he was also known for being inconsistent.

Costa was sponsored by American sportswear company Nike and appeared in Nike commercials. In 1996, he starred in a Nike commercial titled "Good vs Evil" in a gladiatorial game set in a Roman amphitheatre. Appearing alongside football players from around the world, including Ronaldo, Paolo Maldini, Eric Cantona, Luís Figo and Patrick Kluivert, they defend "the beautiful game" against a team of demonic warriors, before it culminates with Cantona striking the ball and destroying evil. Rui Costa features in EA Sports' FIFA football video game series; he was included in the Ultimate Team Legends in FIFA 16.

On 14 May 2008, Costa was appointed an administrator of Benfica SAD. For the 2020–24 quadrennial, he became a vice-president of the club's board of directors, as part of Luís Filipe Vieira's list for a sixth consecutive mandate. After acting as interim president of the club and its SAD from 9 July 2021, in the aftermath of Vieira suspending his presidency due to arrest, Costa was elected 34th president of Benfica on 9 October, assuming office the following day. With 84.48% of the votes, he defeated candidate Francisco Benitez, who received 12.24%. During election campaign, Costa had promised, among many promises, a forensic audit of the club's SAD, a revision of the club's statutes – both promises yet to be fulfilled – transparency regarding football transfers, retention of players "made in Seixal", a reduction of the number of players, a maximum wage for players, improvements to Estádio da Luz, etc. Including his interim role, men's football season was trophyless under his first year of presidency.

Costa was married to Rute from 1994 to 2013, and fathered two sons. The elder, Filipe, is involved in football agency, while the younger, Hugo, is a footballer.

All content from Kiddle encyclopedia articles (including the article images and facts) can be freely used under Attribution-ShareAlike license, unless stated otherwise. Cite this article:
Rui Costa Facts for Kids. Kiddle Encyclopedia.