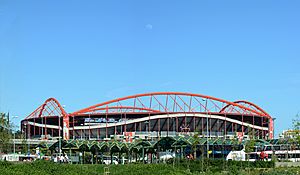 Outside of the Estádio da Luz, pictured in 2013

The Estádio da Luz is a football stadium in Lisbon, Portugal. It has a seating capacity of 64,642. This makes it the biggest stadium in the country. The stadium opened on 25 October 2003. It is the home stadium of S.L. Benfica of the Primeira Liga and the Portugal national team.

All content from Kiddle encyclopedia articles (including the article images and facts) can be freely used under Attribution-ShareAlike license, unless stated otherwise. Cite this article:
Estádio da Luz Facts for Kids. Kiddle Encyclopedia.