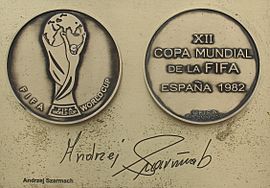 He played in the Polish national team during its "golden age" in the 1970s. With Grzegorz Lato at his right, Robert Gadocha at his left, and Kazimierz Deyna in support, Szarmach profited from the absence of Włodzimierz Lubański to lead the Polish attack, the best at 1974 World Cup, with sixteen goals. While Lato finished first in the Cup in goals with seven, Szarmach, with five goals, also marked the competition with his imprint. He confirmed his status two years later at the 1976 Olympics in Montreal, winning the silver medal and the title of best player of the tournament, with nine goals.

Jowled and moustached, the Polish attacker had a Gallic quality and thus easily fit in at AJ Auxerre. He won the favor of Guy Roux and of the Burgundian public, by scoring 94 goals between 1980 and 1985. After a brief period at Guingamp and a total of 32 goals in 61 games with the Polish national team, Szarmach began his career as a manager, in particular managing Clermont-Ferrand, then Châteauroux in the second division.

All content from Kiddle encyclopedia articles (including the article images and facts) can be freely used under Attribution-ShareAlike license, unless stated otherwise. Cite this article:
Andrzej Szarmach Facts for Kids. Kiddle Encyclopedia.